Boise State's football season has begun, which means so have the final seasons of the next wave of Broncos—the 2015 recruiting class. Each week we'll check in on the progress of the 2015 verbal commits as they finish out their prep careers. Last season, the roundup ended up being an exercise in futility with a wave of de-commits (for giggles, look at this edition from September of last year). We're hoping we get a little luckier this year.

CDA kicked off their season on Friday night, traveling to Idaho Falls to take on Skyline—a game the Vikings won 26-13 and moving to a perfect 1-0 on the year. The two-time defending state champs got a pretty good test from a Skyline team that was just 3-7 a year ago...with the game tied at 13 heading into the 4th quarter. CDA pulled away in the 4th (sounds familiar) and escaped with a victory. Berger, who also plays running back for the Vikings, had 7 rushes for 62 yards. No defensive stats were released. Couer d'Alene will host Central Valley next weekend.

The Leesburg Yellow Jackets kicked off their regular season on Friday night with a 41-21 win over Tavares. Jefferson looked like he was already in mid-season form with a huge night on the offensive side of the ball—hauling in seven catches for 134 yards and 2 scores and rushing for another 68 yards and one more TD on the ground. Not too shabby. Leesburg will play Eustis next Friday to try to move to 2-0.

Salesian kicked off their season with a 27-3 victory over Muir on Friday night and now sit at 1-0 on the season. I couldn't find any defensive statistics for Wright from this game, but he also plays QB for Salesian and finished the night 6-of-15 for 63 yards and a TD. Salesian will look to move to 2-0 next Friday when they take on Claremont.

South Oak Cliff's season didn't get off to the best start yesterday as they dropped their opener to Cedar Hill 56-34. Stats are going to be hard to come by this year, but Blair did have a 45 yard TD reception in the loss. South Oak Cliff will try to even up their record when they take on South Grand Prairie on Friday.

West Mesquite kicked off their season with a 55-22 victory over Seguin on Thursday night to move to 1-0 on the year. No full game stats were found, but Butler did have one 13-yard TD in the win. West Mesquite plays Wylie on Friday night.

Rypien's assault on the record books doesn't begin until next week, when Shadle Park opens their season against Fife this Saturday. The Spokesman-Review did a nice cover story this weekend however that featured not one but TWO future Broncos on the cover. 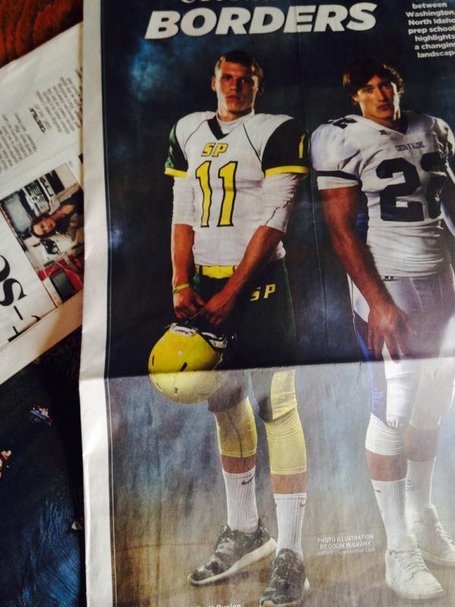 Nimitz lost their season opener to non-conference foe Conroe on Friday night to fall to 0-1 on the season. Once again, no stats for the game were available, but Stewart, like LaDarryl Blair and Damion Wright is playing QB for his squad this season as well as safety. Hopefully some stats will start rolling in soon or this year's roundup is going to be lame.

Larson and the Grizzlies lost their season opener on Friday night to Middleton, leaving them 0-1 on the season and in unfamiliar territory for the powerhouse Fruitland program. Larson also plays DT for the Grizzlies, so I was hoping that some stats may have been logged, but high school stat-keeping must be a low-paying gig because no one is currently doing it. Fruitland will play Ontario this Friday to try to even their record.

Stats are hard to come by...especially this season, so if you are a person in the know—such as a parent, coach, relative, or friend of a recruit—and have some stats...please send them our way.