It's the 14th and we're 14 days from kickoff...who better to highlight than number 14 on the Bronco roster—Troy Ware 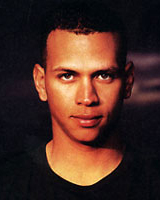 The last few years I've been saying Ware resembled actor Harry Lennix, but i think he's matured into an A-Rod

Ware reminds me a lot of departed senior WR Aaron Burks. We always hear a lot about him in practice, but he kind of disappears in the games. I mean, I was genuinely surprised that Ware had played in all but one game last season—I remembered his first reception, an 18 yard TD strike from Grant Hedrick against Fresno State, and I remember a costly fumble in the Hawaii Bowl...but everything else is just a blur to me. I'm not sure why Ware goes full chameleon when he comes into the game either, his 10 receptions weren't high a season ago, but two of those were TDs, meaning he scored 20% of the time he hauled in a pass. This year in camp, Ware has been largely quiet...with most of the buzz being built around Chaz Anderson and Thomas Sperbeck at the 3rd WR spot, and the usual suspects (Williams-Rhodes and Miller) getting the rest of the pub. Maybe this will bode well for Ware this season—the weight of expectations are off and he's built enough goodwill with his quarterback to be a trusted target when he's in the game. This season, I hope Ware's Houdini-act will be him disappearing behind opposing defenses and emerging with the ball in the end zone,. That's a disappearing act we can all get behind.

Troy and Joe Martarano have vowed to join forces to form an unstoppable offensive machine this season. It's name: WareMart