I don't recall getting a vote on the matter, but apparently this IS Jay's nickname 'round the practice facility. Of course, that was before all this: 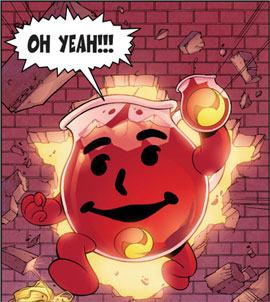 (The bricks are opposing D-lines)

Ponder this for a moment. Jay Ajayi averages 6.0 yards per carry over his career. That's not a one-off garbage time absurd YPC average either. Ajayi has carried the ball 331 times in his still short Bronco career, and on average, after he totes the rock on 1st and 10, the Broncos are left with a manageable 2nd and 4. Of course, last season, the next play would've probably been a 2-yard loss on a bubble screen, BUT STILL! Ajayi is the clear-cut starter at running back, which is nice because it frees up time that we can devote to deciding who his primary back up should be (my vote: Clone Ajayi) and wringing our hands about if he will or won't return for his senior season. There will be plenty of time for those prop bets, but in the meantime, just enjoy Ajayi while you can. He's a rare talent and fun as heck to watch tote the rock. As Ajayi goes this season, the offense goes and I have a feeling things are going to go well. Since Ajayi has put up some rather gaudy numbers in his two years playing on The Blue, I'll jinx him terribly and say I think he's a Doak Walker finalist this season and gets to the 1,500 yard plateau. Attack, Jay!

My flight to Boise is delayed...I swear something tryna keep me from getting there but IMMA MAKE IT!!! IJN

Ajayi's pickle juice guzzling routine has inspired a host of imitators amongst his running back brethren. Charles Bertoli has taken to downing Sriracha shots on the sideline while Jack Fields has been brushing his teeth with Vlasic sweet pickle relish.