We've got just 54 days until the Broncos hit Atlanta, so today I'll highlight the player that wears the #54 jersey for the Broncos—Mat Boesen

Boesen was a standout everything at Torrance's West High School, starring on the gridiron and the wrestling mat. 2012 was a particularly good year for Boesen, as he helped lead his team to a berth in the CIF championship game while breaking the school's single-season sack record (16) and recording nearly 900 receiving yards. Then, Boesen carried his momentum right into wrestling season, where he won a Bay League championship and finished 3rd at state. For Boesen's football exploits, he was named CIF Northern Division Defensive Player of the Year, Daily Breeze All-Area and to MaxPreps California Division II All-State Second Team. Boesen chose the Broncos over San Diego State...and it's a minor miracle he didn't have any more offers besides those two.

Son of Odin. He who vanquished Jotunheim. 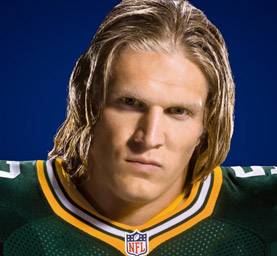 I didn't think the Broncos could afford to redshirt Boesen a year ago...I was wrong, but the reason his redshirt remained intact was probably more of a case of him being penciled in to a new position—nickel. It was thought that Boesen would be the new prototype at that position, but now that Coach Yates is back, the nickel position will look more like it did when it was initially instituted in 2008 (inaugurated by Ellis Powers). Therefore, Boesen—whose body type and skill set makes him a natural at STUD end, will be moving back to...you guessed it: STUD end. No one should have any qualms about this move—least of all, Boesen himself—he was an absolute monster at West High, brutalizing QBs and clogging throwing lanes. I was intrigued to see Boesen line up at Nickel, but I'm downright giddy to see him back at end. The Broncos lost an all-timer at end when Demarcus Lawrence declared for the draft and while they have more than enough bodies to make up for his departure, have a steep hill to climb to replace his production. Having STUD ends Boesen and Gabe Perez, two youngsters with high motors and fantastic athleticism is a step in the right direction. I think Boesen locks up a spot in the heavy DE rotation this Fall and becomes a major contributor in Yates' new-look defense. Look for his flowing blonde mane to be tantamount to a shark fin in the peripheral of opposing QBs.

Perhaps no entity was more damaged by the NCAA's endorsement restrictions than Pert Plus, who were prepared to offer Boesen big bucks to promote their new line of 2 in 1 Shampoo + Conditioner.