We've got 28 days left until kickoff, so today I'll take a look at the Bronco that wears #28 on the roster—Dillon Lukehart

Lukehart was a nowadays ultra-rare "Idaho de-commit" as he first jumped on a Vandal offer not knowing if the more coveted Bronco scholly would materialize—it did, and he dropped the Vandals like hot rocks, prompting local sports-talkin' guy Dave Tester to pen a scathing blog post about the diminishing value of a handshake. Lukehart was first-team all-state as a running back and defensive back as a senior and voted SIC Offensive Player of the Year after rushing for 1,824 yards and 26 touchdowns. On the defensive side of things, he racked up an impressive 106 tackles his senior year as well. As a junior, Dillon ran for 1,049 yards and 20 TDs.

What do we have here? 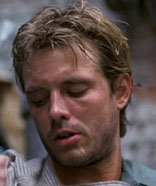 There's good news and bad news for Dillon Lukehart heading into Fall Camp. The bad news is that he was officially supplanted on the strong safety depth chart—overtaken by HIGHLY touted true frosh Dylan Sumner-Gardner. The good news is that he finds himself still in the 2nd slot, just at the free safety position (that makes him Darian Thompson's backup instead of Jeremy Ioane's). There may yet be further good news for Lukehart, who despite backing up Ioane, still registered 46 tackles and 2 tackles-for-loss a season ago: Marcel Yates is the new DC and he's all for spreading the playing time around; making sure opposing offenses are nice and overwhelmed. Lukehart has been a key special teams contributor during his time at Boise State, and has developed into a nice option at safety as well. His experience will pay huge dividends this year and I think he can match last year's output at a minimum depending on how Marcel and company draw things up. In a coaching transition year and coming off a rough defensive outing in 2013, it will be important to have the leadership of upperclassmen like Lukehart, who know how to do things the Bronco way, even as the rest of the squad learns the Harsin and Yates way.

Lukehart was actually ejected from last year's BYU game for this: