With 38 Days until kickoff, fall camp is just around the corner. As MWC Media Days are set to begin tomorrow, we'll highlight one of the players who will accompany Coach Harsin for all those interviews—Corey Bell.

A two-way player for the Capital Eagles (S/RB), Bell finished his senior season as a first-team all-state selection and was named SIC player of the year after recording 44 tackles (12 for loss), 3 sacks, and 3 INTs on defense and accounting for 1,204 yards of offense and 25 TDs on offense. In Bell's junior campaign, he had 50 tackles (9 for loss), 3 INTs and 2 forced fumbles. Bell was also named to the Academic All-Conference team on 3 separate occasions. Despite the accolades, Boise State extended Bell his only scholarship offer. Originally slated to grayshirt, the coaching staff decided to bring him to campus in the fall of 2011 to redshirt but quickly earned his way onto the field, burning his redshirt midway through the season. Actor and Prada model Michael Pitt. I only know that actor from the creepy movie Murder by Numbers. 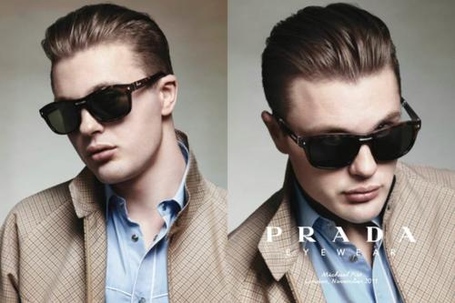 Bell has started 14 games off and on the past two years and has been a mainstay on special teams, recording the second most tackles on the squad last season and was named Fall 2013 Academic All-Mountain West. During his prep days, he was the 2010 SIC Player of the Year, a 2010 first team All-State selection, and was selected Academic All-Conference three times.

The release of Boise State's preseason depth chart today has made my job pretty easy, but in Bell's case, the job wasn't particularly hard to begin with. After undertaking his second position change in a number of years, if only in name, Bell will start every game he is able and has by far the most experience at the nickel position. Despite being the elder statesman, Bell hasn't rested on his laurels, dominating much of spring ball, earning himself numerous daily accolades and praise. It's a fair bet that Bell will get another nod for the All-MWC Academic Team, but the bigger question is will he make the plain ol' All-MWC team? Honestly, I doubt it. Outside of Ellis Powers' 78 tackle performance in 2008, no other nicklebacker has recorded more than Bell's 45 in 2012. Now I know and you know that judging Bell by how many tackles he makes is like judging a pitcher's season performance based on wins: it's not the whole story. But, members of the press corps, who vote for a portion of the All-MWC awards, can sometimes be blinded by gaudy numbers.

In my opinion, there are two types of leaders: vocal and by example. Bell is the latter. Sure he's vocal, but his leadership prowess can be seen by the way he goes about his business. He has an unwavering pursuit of bettering himself, whether on the field or off. He is a teammate that young players can and should look up to. I don't know if it's in his future, but I'm sure Bell will make a hell of a coach one day.

No time for that nonsense.

Bell's favorite season by a pitcher is Felix Hernandez's 2010 campaign in which he won the Cy Young Award. His win-loss record was 13-12. 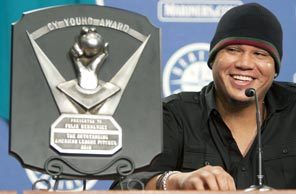