39 Days until kickoff against Ole Miss. Today, we highlight a walk-on who will wear the #39 jersey this season—David McKinzie.

Not a lot is known about McKinzie. He joined the Broncos last fall as a walk-on wide receiver after a decent prep career at Princeton. Along with two letters in football, he also lettered three times a piece in both basketball and track. 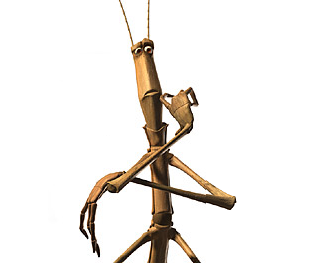 Slim from A Bug's Life.

McKinzie was named to the Texas 3A All-District 12 Second Team as a senior after hauling in 52 catches for 900 yards and nine touchdowns after catching 48 passes for 800 yards and seven touchdowns during his junior season. He was fairly popular, snagging the title of class president.

Unfortunately for McKinzie, buried doesn't even begin to describe where he sits on the depth chart. 13 players are listed as wide receivers on the Boise State roster and McKinzie is close to the bottom of that list. That's not a bad thing though. He's only a redshirt freshman and a walk-on to boot. The best days of McKinzie's football career are ahead of him and hopefully he makes enough progression in the coming months to challenge for playing time the next couple of years. For some highlights from his high school days, take a look below:

Yes and it looks like the Pit Viper has made his mark: