Cota came from up the road at Eagle High where he was an all-state O-lineman as a senior and a three-year varsity letter winner overall. Given Cota's somewhat niche skill set, he didn't have any offers, but was considered a valuable asset by the Bronco coaching staff who offered him a preferred walk-on spot. Cota was a two year alum of Chris Rubio's Long Snapping Academy—Rubio being "the #1 long-snapping instructor in the country and we'll take your word for it". You can see some of Cota's snapping prowess below. Snapping prowess. 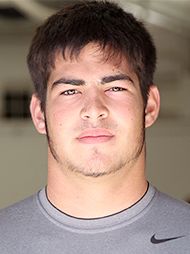 Teammate Alec Dhaenens is the only name my brain will relinquish on this one.

This probably won't be the longest prospectus of the offseason. In fact, there really isn't much to say here that wasn't already said on day 46 when Jesse covered incumbent long-snapper Kevin Keane. With 13 games under his belt, Keane is the favorite...and the bigger of the two, but Cota has a nice long-snapping pedigree (a term I didn't think I'd end up ever typing) and should work in a pinch if Keane is unable to go. Cota obviously has devoted himself to his craft and should be a reliable LS when his time comes, and may actually get some playing time this season if he snaps his cards right. Long-snapping isn't extremely difficult, but it's difficult to do it right every time. The guy that can do it correctly with the most consistency will get the nod...and you can bank on this fact: it will be one of these two guys. Snap to it, gents!

Cota is a descendent of the infamous "Red Snapper"—a German snapping ace during WWI credited with over 80 flawless snaps on French soil.