We're just 47 days from kickoff, so today we'll highlight the lovable walk-on that will don the #47 jersey—Brandon Brown

You might wonder how how a lightly recruited athlete out of Phoenix managed to connect with Boise State and land a walk-on spot last fall. Well, I think his pops might have had something to do with it. Booker Brown, Brandon's father, played basketball for Boise State from 1971-1973. Brandon took advantage of the opportunity and remains on the roster for a second season—not a small feat. 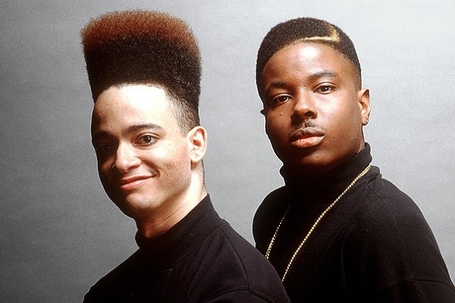 Christopher "Kid" Reid (left) from Kid N' Play. Also, I once had that haircut.

Not much is known about Brown which probably means his chances of seeing the field this year are slim to none. At safety, Brown sits behind a plethora of athletes including presumptive starters Jeremy Iaone, Darian Thompson, and Corey Bell. Yes, three safeties. Hooray 4-2-5! Generally, I would say Brown could make his presence felt on special teams, but it seems that this coaching staff will be more than willing to use starters and important reserves on special teams to make those units as strong as possible. With that being said, it wouldn't surprise me to see Brown on kickoff coverage at some point during the season.

Not that I can find.

Brown is not a fan of In-N-Out Burger, so it made the transition to Boise pretty easy.

Anybody want a 20x20 Animal Style?