We're just 49 days from Boise State's opener, but since that jersey is currently unassigned and the lower numbers on the countdown are booked, today I'll highlight a newcomer instead—Alex Ogle 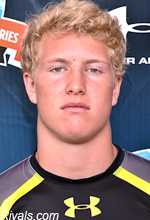 A quarterback over 6'1"? What is this devilry? Ogle was a late but welcomed addition to the Broncos 2014 recruiting class. The Broncos had had their '14 QB wrapped up for months with Jalen Greene, but his commitment went wonky after Chris Petersen left (he ended up at USC, go figure) and then the Broncos failed to woo two blue chip recruits late in the cycle. All looked hopeless and then BAM!, OC Mike Sanford ventured down to Florida, worked Ogle out and was sufficiently impressed to have Bryan Harsin call and offer him on the spot (at a Steak n' Shake, to be exact). Ogle was under-recruited, but was rated a 3-star by both 247sports and ESPN after throwing for 2,338 yards and 22 TDs his senior season—earning the team's MVP distinction and All-East Coast Regional Elite honors. Ogle also held offers from Florida institutions FAU and FIU.

I don't know. It rhymes. 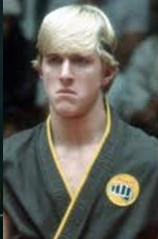 Get him a body bag...Yeeeaah.

Passed for over 4,000 yards and 34 TDs in varsity career. All-area honors after senior season and was selected to two all-star teams (Florida vs Georgia and Treasure Coast vs Palm Beach County). Four year honor roll student.

There's really no reason to mince words here...Ogle isn't the quarterback Boise State fans expected to sign in the 2014 class. It was obviously a roller coaster of a year both off and on the field and the Broncos had to dig deep to come up with any QB at all in the cycle. Then, the departure of Nick Patti made things even more dire and just as things were at their bleakest, the Bronco coaching staff gleefully announced the commitment of Ogle and he was signed, sealed and delivered in short order. So, the late nature of Ogle's courtship and the fact that Boise State's fanbase had felt very much the bridesmaid starting in mid-December made Ogle's commitment somewhat anti-climactic. That wasn't Ogle's fault, and we certainly shouldn't hold it against him.

Yes, we all know that the quarterback play hasn't been stellar of late...and after limping to a very uncharacteristic 8-5 season, Bronco Nation is very much desirous of another savior at signal-caller. So, could Ogle be that man? I honestly don't see why not. He wasn't the highest rated player available, but keep in mind...we've been burned by those types before *cough* Nick Patti *cough*. So writing Ogle off before he's had a chance to test his mettle would be a big mistake, in my opinion. He's obviously not going to play this year unless some catastrophe were to befall the squad and with rumors of Brett Rypien enrolling in January, will have a pretty epic QB battle to endure in 2015, but you just never know how guys are going to respond at the next level. One thing is certain, Ogle is here now, and Rypien—whose bandwagon many have already jumped on—is not, so let's give Ogle the same benefit of a doubt that Mike Sanford and company gave him and see what he can do. Sanford's seen plenty of elite QB talent and offered the kid on the spot, so throw stats and offers out the window...the kid can play.

Great day helping @drewbrees out with his passing academy! Drew inspired me last year and I can't thank him enough! pic.twitter.com/cfSE4oq4cQ

Yeah..but who's that short guy on the left?

Jensen Beach is a major test market for products. He doesn't like to brag about it, but Ogle was the first person to try a Cool Ranch Doritos Locos Taco from Taco Bell. His review: "Ranchtastic."