Last day of the 80s. Throw out your acid-wash jeans.

We've got just 80 days until kickoff, so today let's take a look at #80 on the Bronco roster—DJ Dean

Dean was a two-way standout for the Eagle Mustangs, and his contributions to the squad were recognized with the 5A SIC Player of the Year award in 2011. Dean was all-state as a defensive back the same year after making 77 tackles, 6 INTs and forcing 2 fumbles. He was a pretty darn good receiver as well—catching 56 passes for 801 yards and 5 TDs in 2011. Dean played quarterback at Eagle before BYU QB Tanner Mangum transferred over...a move that might have ultimately landed him his Boise State scholly.

The nemesis in every 80s college movie. 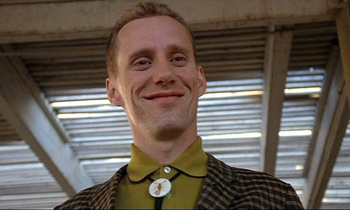 I'll readily admit that D.J. Dean is one of the forgotten receivers in the unit, and honestly, it might be because he's so versatile that it's hard to classify him. Much like WR Thomas Sperbeck, Dean was recruited as an "athlete", and came in with the ability to play several positions. In fact, the Sperbeck comparison is especially apt because both played quarterback and safety in high school and both ended up in Boise State's WR corps (Dean played WR as a senior at Eagle High). That versatility is an extraordinary gift...but can make it tough for college coaches to choose the right path for the signee. More often than not, the Bronco coaches have plugged their athletes into the right slots and with a WR corps that seems to grow deeper by the day, I'm wondering if Dean will stay on the offensive side of things. Dean definitely has the athleticism to play the wide out position, and being as his skill set most closely matches the presumptive front runner for the 3rd receiver slot (Sperbeck), you'd think he'd be a shoo-in, but I think that Dean's injury has shuffled the WR deck a bit and I don't know that I'd completely rule him out in the defensive secondary—it all depends on what the new coaching staff sees in the local product. He was the offensive camper of the day on April 1st, so maybe I'm getting too ahead of myself, I just don't see many projections that put Dean in the WR two deep and I want the Broncos to be able to utilized him to the best of his abilities. Special Teams for the frosh should be a given, and if he can break into the depth chart in Fall Camp, I'd be delighted...but a kid with Dean's versatility should never be warming the bench. The coaching staff will have 4 years figure him out.

DJ is a distant relative of James Dean. Not the famous actor or sausage king, mind you...but a guy that acted in several sausage commercials.