We've got just 65 days until the Broncos kick off their season against Ole Miss, so today I'll highlight newcomer that could (but probably won't) wear the #65 jersey—Jabril Frazier

The Broncos were able to pull off a signing day coup when Frazier chose the Broncos in a televised hat ceremony over in-state USC. Frazier was a 4-star recruit according to 247sports and one of their top 30 prospects in the state of California. Frazier racked up 191 tackles (146 solo) in his two year varsity career as well as 25 sacks (19 of which were in his senior campaign). For his efforts last year, Frazier was named to the All Del Rey League first team and the All-CIF team and was also named the League MVP. Frazier picked the Broncos over reported offers from USC, Utah, Arizona, Northern Arizona, Houston, Illinois, Indiana, and San Diego State. Check out his swath of destruction below:

He doesn't box or use tobacco, but the man smokes a mean brisket. 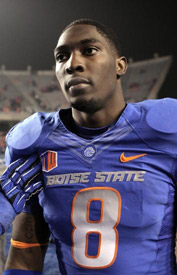 We're all hoping he looks EXACTLY like this guy once the ball is snapped.

If you aren't excited about Frazier yet, you should probably do so right now—this kid is MC Hammer levels of LEGIT and will be on campus in July. At 6'4" and 225 lbs. Frazier was able to wreak terrible havoc across the Del Rey League, averaging 9 tackles and nearly 2 sacks a game over an 11 game slate. Frazier was such a one-man wrecking crew at Verbum Dei, in fact, that all but EIGHT of his tackles on the season were registered as solo. Who has 91 solo tackles?! Jabril Frazier, that's who...and while he's not going to be churning out stats like that from a defensive end or STUD position at Boise State, he should be a major contributor to the Bronco D in short order. How short the order will be a fun Fall Camp storyline to watch. Boise State obviously has to make up for the production its losing with the departure of Demarcus Lawrence and I can't think of anyone more suited to that role, at present, than Jabril Frazier. Frazier is young, and by some accounts raw...but has the motor and athleticism to be inserted right into the lineup, in my opinion. When you can bookend your D-line with tenacious pass rushers, the rest of the defense benefits, and since the defensive secondary was a bit of a liability a year ago, I'd like them to have as much mulligan room as possible in 2014. When Frazier signed, he was at about 225 lbs. but I think he'll likely be closer to 240 when the season starts...that's already close to Lawrence's playing weight...and with a similar skill set to our dearly departed DE, it's hard for me to imagine a scenario where Frazier doesn't play this year.

We at the gym bright and early.

Frazier perfected his pass rushing technique in the off season by hitting the local drive-thru car wash. He'd run through and try not to get wet. It took him several tries (and several coats of wax), but he finally mastered it just before the season began.