Can't tell you how many times I typed his name "Andrew". Muscle memory.

We've got just 68 days until kickoff, so today I'll highlight a Bronco newcomer that could wear the #68 jersey—Andres Preciado 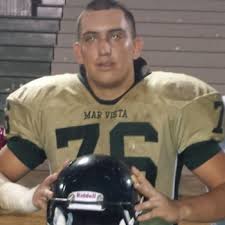 Preciado was a surprise recruit in the fact that at the time of Bryan Harsin's commit-trumpeting "Go Broncos" tweet, the most common reaction was "Who?". At 6'6", you'd think that Preciado would be hard to miss, but that's exactly what most people (myself included) did. The more you investigate Preciado though, the more there is to like—even if he didn't have the stars or fanfare attached to his name. Preciado was a two-time team captain at Mar Vista and was selected first team All-CIF as a senior. As a sophomore, Andres was selected second team all-league. Not only was Preciado a force on the football field, but he was a standout basketball and baseball player at Mar Vista as well. Possibly Preciado's biggest feats were reserved for the classroom, where he was a 4.3 GPA student, class president, a Union Tribune Scholar-Athlete (both junior and senior seasons), and a four year student body finance commissioner (is this like a CPA?). Here's a nice little article about Preciado that shows just how busy an individual he was.

The only other person that I could think of with the name "Andres". Creativity has left me this fine Saturday. 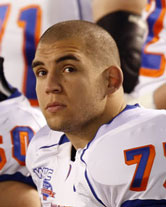 Getting a bit of a Ben Iannacchione vibe.

It may be an odd year on the O-line at Boise State. We have a razor thin margin of error with 11 on-campus lineman returning and 3 incoming frosh showing up in about two weeks. In general, O-lineman are a lock to redshirt, but this may be a year that we see a youngster step into the two deep out of necessity. That said, I don't think Preciado would be at the top of the list of potential 'shirt burners (that distinction would go to Troy Bacon, in my humblest opinion). It's not that Preciado doesn't have the chops...the kid is smart as a whip...it's just that he's such a great well-rounded athlete that he'll likely hit town under weight for his probable landing spot, offensive tackle. Anyway, I think our tackle situation is somewhat less dire than the depth wasteland that sits behind our starting guards. Preciado has the football IQ, work ethic, and athleticism to be a special tackle for the Broncos, I just think putting him anywhere near the field this year would be unlikely...and a mistake. Preciado should coast into town, absorb the playbook, follow Pit's proven weight-gain techniques (Dickey's BBQ) and prepare to start his long and fruitful career in 2015.

Preciado translates to "valued" in English which is a tad ironic given that Andres was so undervalued during the last recruiting cycle. Maybe if his surname was "Subvalora", he would've had dozens of offers.