We've got 73 days until the Broncos' season opener, so today we'll highlight the player that currently wears #73 on the roster—Travis Averill

Averill was a star on the offensive line for national power Servite and has the hardware to prove it. Named the Trinity League Offensive Lineman of the Year in 2011, Averill also garnered first team all-league honors as well as All-CIF, all-county and all-state (2nd team) nods. As a junior, Averill was named All-Trinity League, first team All-CIF and first team all-county and threw in a 3rd team all-state nod as well. Averill chose the Broncos over offers from Arizona, Colorado, Iowa State, UCLA, Washington and Washington State.

This one isn't going anywhere. 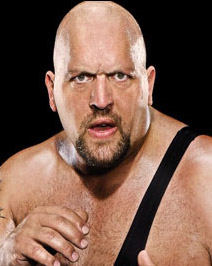 Big Show or The Giant or whatever they call this big fella nowadays.

After starting 3 of the final 4 games of 2013, it would appear that Averill is trending upward...and at the right time. Last season, Averill made nine game appearances with 3 starts at right tackle and should be considered a favorite to snag a starting spot this Fall—we're just unclear as to which spot exactly. Both Kevan and I projected Averill as a starter at guard in our post-Spring depth charts, but obviously tackle and center are other possibilities. To me, tackle seems his most natural position, but with former right guard Marcus Henry playing center in Spring Camp, and Rees Odhiambo likely to step back into the starting right tackle slot, it seems to me that right guard might be where the big Californian lands. He's up about 10 lbs since last season to cross the 300 lb threshold and his experience level has only increased. I say he stays on the right side of the line, but shifts to the interior, where he could be backed up by a true frosh, converted d-lineman or a walk-on. None of those options is ideal, but that appears to be the type of season we're in for on the O-line. Nobody get hurt, okay?

To save time and effort, Averill has proposed that he be called a contraction of his first and last name this season, so be prepared to just call him "Traverill".