We've got just 78 days until fans roll out of Waffle House and into the Georgia Dome to see the Broncos take on Ole Miss, so today we'll highlight an incoming player that might wear the #78 jersey for the Broncos—Tennesee Su'esu'e 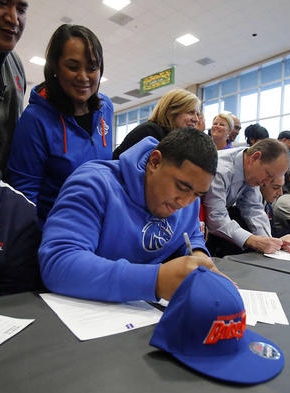 You are Bryan Harsin and you just inherited a perennially ranked program from the program's most respected coach. Looking down the depth chart, you know you need to add some talented girth on the O-Line. What do you do?

You tap into the Poly Pipeline.

Su'esu'e, of Samoan descent, was rated a consensus three-star recruit from the major recruiting services and marked the second signee of the Harsin era, Dylan Sumner-Gardner being the first. He is considered one of the top 15 prospects in Utah by 247sports.com, the No. 22 overall recruit in the state by ESPN.com, and the No. 24 center nationally by Scout.com. All of that and he only played two years of high school football due to cardiac arrhythmia, for heaven's sake!?!?!?! With that little issue in the past, the Broncos are getting a gem. Su'esu'e chose Boise State over offers from Utah State, Weber State, and Southern Utah.

"He really was our cerebral leader on the field. He’s a really smart kid and combine that with his size and athleticism, I think he’s going to be fantastic." - East football coach Brandon Matich, on Tennessee Suesue to Deseret News 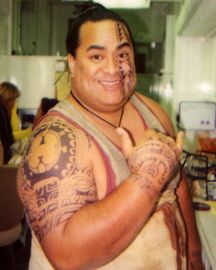 Anchored a juggernaut rushing attack at East High that rolled to 5,326 yards and 66 touchdowns on the ground on the way to a 13-1 record and a Utah Class 4A  runner-up finish in the 2013

This is no slight on Su'esu'e's talent (that's a lot of apostrophes) but it's fair to assume that he will redshirt the upcoming season. Boise State's success over the past decade can be traced to the ability to redshirt players along the line. Moving forward, that trend shouldn't, and hopefully won't, change.

Slated as a Center, Su'esu'e will face stiff competition in Fall Camp from the likes of Marcus Henry, Travis Averill, Andrew Tercek, Kellen Buhr, and fellow 2014 signee, Troy Bacon, whom we profiled yesterday. As Drew conveyed in that post, Bronco Nation better hope that Su'esu'e doesn't see the field in 2014 because that will mean something catastrophic has happened, either through injury or regression.

It may take a few years, but there's no reason not to expect that Su'esu'e will become the tenacious mauler coaches dream of.

This has been posted on this site before... but WOW