We've got just 88 days until the Broncos storm Atlanta, so today we'll take a look at the player that wears the #88 jersey for Boise State—Jake Roh

Roh was a two-way standout at Chaparral High School where he starred as both a linebacker and wide receiver. In Roh's senior season, he caught 72 passes for 805 yards and 13 TDs and was even more impressive in his junior outing, where he had 922 receiving yards on just 49 receptions and (18.8 YPC) and 17 TDs. Defensively, Roh was well-known as well, with 72 stops and 4 INTs in his senior season alone. Besides Boise State; Arizona, Duke, Iowa, Nevada, Oregon State, San Diego State and Washington State all offered the talented athlete...but Roh chose Boise State after narrowing his options down to the Broncos and Hawkeyes.

He-Roh? Full disclosure: I thought of this and not my first grader. 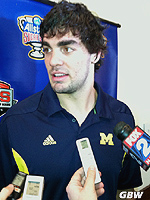 Now would be a good time to remind everyone that Roh was the 3rd leading receiver in the annual Spring Game AND was nationally ranked at the WR position as a high school senior. That this should mean that we have another dangerous playmaker in the TE unit goes without saying—now there's just the small matter of actually injecting the tight ends back into the playbook—something I dare say Mike Sanford is doing as we speak.

The slow disappearance of the tight ends from the Bronco air attack is something that I never thought would happen...and it certainly wasn't for a lack of talent (although depth at the position was ultra thin a year ago). Boise State once was a destination stop for tight ends and H-back types, and for years, were putting up numbers and logging minutes that would make one think they were just "another receiver". Bronco TEs used to have 1,000 yard careers, but at the rate they've gone the last two seasons, they'd need to have 20 year careers to make those numbers happen. But that was last year (and the year before).

A new day has dawned in Boise, Idaho...the Bronco TE unit is as deep and talented as ever and we have another offensive coordinator to contend with...but one that played for the Broncos during part of their TE golden era and knows the importance of the big men. Roh isn't the biggest of the bigs...but he's got all the tools to succeed in the Broncos "multiple" offense. In fact, Roh could end up being more Matt Miller than Derek Schouman when all is said and done, and I don't think we'd care one iota. At Fall Camp's commencement, I expect Roh to be right in the mix for the TE two-deep and wouldn't be surprised to see him in the top 5 on the team in receptions and yards this year. Of course, then the honus goes back on the signal-caller to make sure Roh's playmaking abilities are utilized—something I feel increasingly confident Hedrick (presumably) will dial in by the opener.

Roh owns a boat. The way he navigates it down the stream has been described as "gently".