We're not going to let the NFL bogart all the draft fun this year, it's time for the first annual (if we remember) OBNUG draft of randomness. Here's how (I hope) it works. I'll pick one category per round and you wonderful people make the picks. I'll try my best to get picks in sequentially, but as the acting Roger Goodell of OBNUG, I also reserve the power to reject picks, allow trades, etc. I have no idea how this is going to work...but that's part of the draft fun, no? 32 picks per round...let's have some fun.

1. MyBroncos—Raisin Bran ("A safe choice, but will get a franchise player from day one.")

2. smurfturfer—Cinnamon Life ("The fanbase won't be happy that they left Cinnamon Toast Crunch on the board.")

3. Dothework—Boo Berry ("Count Chocula just had too many red flags...getting a real workhorse in Boo Berry.")

6. OBNUG—Golden Grahams ("Cannot believe GG was still on the board. Turns the milk beige like no other.")

11. kcam—Wheaties ("A lot of hype. Not much substance...maybe sugar can bring out it's true potential.")

12. OBNUG—Cracklin' Oat Bran ("OBNUG missed a huge opportunity here with Lucky Charms still on the board. I mean, do they even make this anymore?")

15. JALLMITCH—Lucky Charms ("JALLMITCH really making moves here in the middle of the first round, gave up a 2nd and 3rd round pick to get Lucky and the gang.")

16. Please Spay and Neuter Your Pets—Frosted Flakes ("Wheaties for people with taste buds. I like this pick.")

17. Rand McNalley—Homemade Granola ("The equivalent of drafting a kicker in the first round...which the Raiders have done.")

18. polhoward—Honey Bunches of Oats ("This pick makes bunches of sense for the polhoward franchise.") 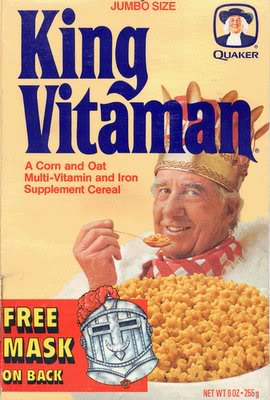 20. TDown—Trix ("I like the pick, but feel they've just inherited some silly rabbit problems.")

Commissioner pulling the plug on Round 1 due to clock expiring. On to the second round...

2. warriorsscore110—Negaduck ("Franchise really showing their age with this pick...because people over 30 had to google it.")

6. Rand McNalley—Mumm-Ra ("Showed up at Combine heavily-bandaged—not sure if he's performing at 100%")

7. BluBlood48—Wile E Coyote ("Does not possess elite speed, but Acme can help him with this deficiency.")

Since the actual draft has started, the Commissioner has decided to turn off the draft clock. Thanks for helping us all kill time before the draft re-opened. If you'd like to keep drafting players or come up with your own categories, Roger Goodell wouldn't mind at all.