It's time once again for the greatest tradition in all of OBNUG, the Masters the Numerical Roster Countdown. For those that are new to OBNUG, the countdown is simple...we'll highlight a roster spot per day that corresponds to the number of days until the Broncos opener in Atlanta. Some numbers aren't assigned yet or are double-booked, so those days are a judgement call, but we'll get 99 spots accounted for by August 28th...promise.

We've got 99 days until kickoff against Ole Miss on August 28th, so today we'll be highlighting a player that might wear the double nines—Antoine Turner 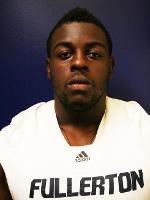 Perseverance. At McDonough High School in New Orleans, Turner used football as an outlet to help keep him away from dangerous elements on the streets, but with grade issues keeping him from landing serious scholarship offers a less-than-exhaustive web search led him to Fullerton College in California. Again, grades and struggles in his personal life threatened to derail his college career, until a chance meeting got him back on track, back in shape, and back to turning the heads of college recruiters. Turner drew interest from Kansas State and Oklahoma, but eligibility concerns scared them off—only the Broncos extended a scholarship offer...an offer Antoine gladly accepted. But enough from me—let KTVB's Jay Tust tell you the rest.

Turner's life seems to have been one crazy trial after another. Let's hope his post-war odyssey is nearing an end. 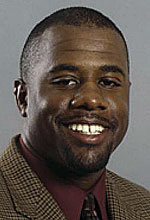 Whoever this guy is.

Notched 34 tackles (16 solo), 13.5 for-loss and six sacks last year as sophomore at Fullerton. Also had four pass break ups and an interception. Named one of the Top 25 JC tackles by 247sports.

Turner is hungry...and 3 square meals a day aren't going to satiate his hunger. He's hungry to make an impact and determined to leave a legacy, and lucky for the Broncos, he just happens to line up at a position of need. A few weeks ago, in my "Hurry up and wait" article, I isolated Turner as an incoming player destined to make an immediate impact in 2014, and that belief has only grown over the last few weeks. Jay Tust's exposé shined a light on Turner's plight, but it also showed Turner to be humble, willing to work, and eager to leave it all on the field for the Broncos. The fact that he's already bought in to the Broncos blue collar mentality tells me everything I need to know. Now if he can just get his grades locked in and get on campus, the second part of his journey can begin. It's always hard at this juncture to lock in any kind of depth chart, but I think Turner has as good a shot as any to crack the starting DT rotation this year. Tentatively, I'd put Armand Nance and Tyler Horn in as the starters, with Turner, Nick Terry and Justin Taimatuia most likely to push them. Of course, the yearly "will Tyler Horn stay a tackle" saga will begin anew in the Fall, and could shake things up before the players even have a chance to test their mettle. Watching Turner's film, you see a tenacious pass rusher, who's surprising light on his feet for a big man. He also sheds blockers with GREAT PREJUDICE. I'd be shocked if Turner doesn't see significant minutes this Fall, and not the least bit surprised if he cracks the starting rotation. Remember, Marcel Yates (ah...that's his name) likes to throw a lot of fresh bodies on the field defensively, and will not be locked in by "starter" labels, per sé...this means, in part, that the top six at key defensive positions are likely to have their numbers called and Turner looks like a man with a number begging to be called, whether it's #99 or not.

Antoine's cousin, Ike, was a musician of some renown in the 60s.