Share All sharing options for: Pressure Fuels the Fire

With one more step to get to the NCAAs our women’s gymnastics team is looking solid. Heading to Seattle for their regional tournament our broncos will be seeking their first team run to the NCAAs under the seven years of head coaching by Tina Bird and Neil Resnick. Only the top two in the region can make their way to the NCAAs and with the competition of the number four team in the nation Alabama and a team that has slighted us twice this season Denver will be leaving our broncos with a tough road to the NCAAs. Also, with no wild card opportunities to make the NCAAs our broncos will have to be on top of their game. However, our team has an X-factor that not many teams can be blessed with; pressure. These gymnasts although young in experience at the college level, for the most part, have a tremendous fire in their eyes when they get into big tournaments. Tina Bird said, "They just love that not all the eyes are on them and that there is a large crowd cheering." Rather than folding under the pressure of the lights and crowds our team has thrived under big competition as we can see from our Mountain Rim championship score which was a PROGRAM high at 196.395. The scores that these women can dish out under the lights and on a big stage is impressive for anyone at any level and that is something that we all can be proud of as a Bronco Nation.

Bird said "Just STICK IT." Is the only thing on the mind of our young gymnasts as they head into this weekend. Tina Bird emphasized how important it will be for our gymnast to focus on the event at hand; one routine at a time.  The routines that we have been using all year are the ones that we will be using in the meet ensuring that our team is comfortable with what will happen this weekend. Along with our routines staying the same, by the luck of the draw, our Broncos pulled out the exact same rotation that they have done in each meet this entire year; Vault, Bars, Beam, Floor. However, it’s not all about being comfortable it is mostly about skill and skill is NOT something missing on this Boise State team.

Lead by seniors Amanda Otuafi and Kelsey Black our line up for the big day goes as follows; Cierra Perkins(Jr.), Kelsey Morris(Jr.), Marissa Wossner(Jr.), Maddie Krentz(So.), Krystine Jacobsen(So.), Diana Mejia(Fr.), Paige Urqhart (Fr.) and Brooke Grahm(Fr.). With this line-up we will be pulling out some strong scores. Our juniors, Perkins and Morris, have shown us time and time again that they can score big, but in recent meets have shown nothing but improvement which might be a scary thing to hear if you’re anyone else in Seattle this weekend. Perkins is best known for her performances on the floor. Her energy and ability to stick it on some of the toughest flips is something that will for sure be capturing the eyes of everyone in Seattle. Kelsey Morris is another competitor that is a perfect example of talent and hard work. Ranked at 25th on the All-Around Morris is going to a force to be reckoned with tomorrow and next year. However, our veterans aren’t the only people that bring a fire to this team under pressure. Diana Mejia, a freshman, has dominated on her routines of the bars even in her earlier years. She has won Nationals on bars 2 times in high school and has shown no signs of slowing up as she has anchored each meet on bars this season. This year Mejia is ranked 33rd as a true freshman on bars. That is just scratching the surface of the talent that our Broncos have this year. Our incredible depth is the main reason why our Broncos feel comfortable at big events.

With Saturday being so close and so much on the line our gymnast have nothing left to do, but perform like we all know they can. All the hard work has been done. Blood, sweat and tears have been shed and Seattle is the place to show everyone just how talented and dedicated our gymnastics team is. Gymnastics is an individual sport that puts pressure on you if there is two or two thousand people in the crowd. As 11 am brunch roles around our team will hand in their cell phones to coach Bird and head on their way to a first place win at the Seattle Regional! Our gymnast have shown that they perform best in hot water, so let’s take some time this weekend to cheer them on to a berth in the NCAAs. The event will be broadcasted HERE. 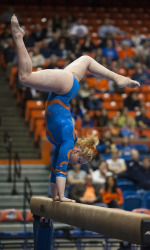 Also, Bird and Resnick aren’t going to be poached by UW I promise.