Broncos in the draft: Demarcus Lawrence

Share All sharing options for: Broncos in the draft: Demarcus Lawrence 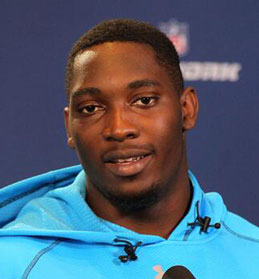 Who they're comparing him to: Jason Babin, Jacksonville DE

How did he do?

Lawrence didn't greatly improve his draft stock at the combine, but he didn't really do anything to harm it either. He went into things projected as a 2nd to 4th round guy, and I still think that's where he fits. If he goes on the higher end of that spectrum, I'd say it's because a team really fell in love with his skill set—that being a team that is looking for a straight-up edge rusher or OLB "tweener", which for better or worse, is where Lawrence fits with his size.

"He can be an every-down player, as he can play the run, rush the passer, and drop into coverage when needed. " —Greg Gabriel, National Football Post

Demarcus Lawrence's upside is hard to ignore. Quick/heavy handed w/ explosive snap. Flexible and finishes strong at the top of his rush.

The consensus seems to be that teams that employ a 3-4 defensive scheme will value Lawrence a bit higher than those that don't—but this really rules no team out, if they have a creative enough D-coordinator. Currently, the Colts appear to be eyeing him the closest, even sending head man Chuck Pagano out to Boise to work him out on Pro Day. I think if we want to follow an easy line of reasoning, we could assume Jacksonville would be a good fit, since the player he was compared to, Jason Babin, is a Jag and at a ripe old age of 33 (I'm 33, BTW). Interestingly, Dane Brugler of CBS Sports recently released his own mock draft and was sky high on Lawrence, pegging him as a first-rounder and having him fall to the 49ers with the 30th pick of the draft. Let's be honest here, who doesn't need a guy like Tank?

Lawrence's Combine grade of 6.1 (grading system changes since last year) doesn't seem great, but if you look at the cheat sheet, a 6.1 grade is considered a potential instant starter in the NFL, while a 6.5 would be considered a potential Pro-Bowl caliber player...so really, this is fairly high praise for a guy that a lot of scouts aren't sure what to do with. Level of competition always seems to get stuck in the craws of pundits, but that clearly didn't affect the draft status of Broncos like Shea McClellin, Doug Martin or Ryan Clady...and those players played a fair share of their careers against arguably worse competition. Lawrence's only real knock, from what I've seen and heard is that he is so hard to classify. He's noticeably bigger now than during his Bronco playing days, but still doesn't fit the mold of the traditional NFL end and doesn't necessarily have the explosive lateral movement of an NFL linebacker. Personally, I think his biggest asset is just that he's a player with a knack for making plays. 20 sacks and 33.5 tackles-for-loss in less than two full seasons is good using any measuring stick, and if you pop in his tape and see his propensity for disrupting plays and creating turnovers, I think studious coaches and GMs will have a hard time passing on Lawrence for long.