A fitting end to the BCS era or something.

Share All sharing options for: Wake Up, Bronco Nation: 1-7-14

Okay, so that was a pretty good game

Florida State stormed back from a 21-3 halftime deficit and then weathered a back and forth 4th quarter to upend Auburn and take the last national title of the BCS era. Of course, FSU ball boy extraordinaire Frankie "Red Lightning" Grizzle-Malgrat stole the show...and my heart.

A quick scan of my Twitter timeline tells me she wasn't alone.

And Bush Hamdan isn't on it (or Robert Prince, for that matter). Boise State filled the last (known) coaching slot on the new look staff by adding Junior Adams as wide receivers coach. Adams was an All-American receiver at Montana State who coached most recently at Eastern Washington, but also had coaching stops at Tennessee-Chattanooga and, wait for it...PROSSER, WASHINGTON.

New TE coach Eliah Drinkwitz tweeted the below picture yesterday morning, showing the former Red Wolf coaches en route to their new home and also answered the age-old question, "how many coaches can you fit in an airplane?" 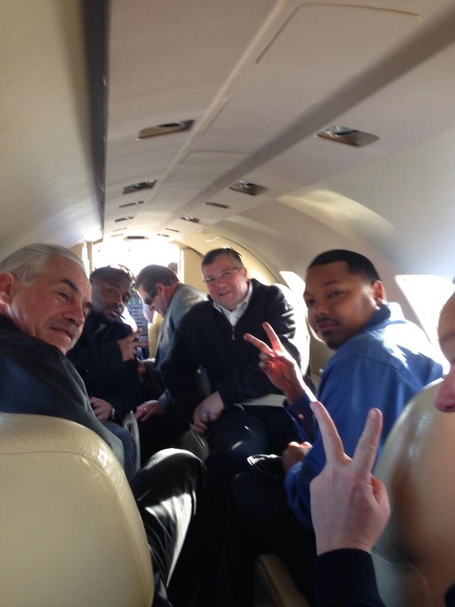 As far as I can tell, (from left to right): Steve Caldwell, Lee Marks, Jeff Pittman, Kent Riddle, Julius Brown and some guy's fingers.

247 recruiting analyst Justin Hopkins (@JustinHopkins247) hinted on Sunday after the Dylan Sumner-Gardner flip that another big recruit may be headed out Boise way. Yesterday on the Bob and Murph Show, Hopkins confirmed that the mystery recruit/flip was another 4-star caliber player and news could be forthcoming. He intimated that this player choosing the Broncos wasn't the "slam dunk" he felt DSG was, but tweeted last night that it was "likely" in his opinion. The suspense is killing me/us.