Boise State enters MWC league play with a 10-3 record. Outside of the home loss to St. Mary's, the non-conference portion of Boise State's schedule went about as expected. At the time, that loss didn't look that bad as St. Marys was undefeated. Unfortunately, the Gaels have lost four of five games since. Boise State's best game came at the Diamond Head Classic in Hawaii against South Carolina. Not only was the victory the best on paper, the Broncos completely dominated the Gamecocks from start to finish.

The overriding theme entering league play is, "Shouldn't this team be better?" The Broncos are by no means bad, but this was the year that Boise State was supposed to go into Rupp Arena and compete with Kentucky, beat Iowa State on a neutral court and blowout St. Mary's at home. All three were losses and the Broncos looked particularly outmatched against the Wildcats which Bronco Nation (and myself) had billed the biggest non-conference game in the school's history.

Across the board, it just doesn't seem that any of the players have progressed. In Derrick Marks' case, a real case of REgression could be made. Some people could argue that Ryan Watkins' production has improved but he is equal parts "What are you doing?!?!?!?!?! " and "Ok, I can live with that" at best. Anthony Drmic is still solid and the only complaint I have about Jeff Elorriaga is that he needs to be a little selfish and shoot more. When a player is shooting a ridiculous 57.4% from behind the arc, he has license to force a few shots here and there. The reward outweighs the risk. Compare that to Marks who will force the outside shot yet is shooting a career low 27.8% from three. Marks is a great playmaker, but he needs to leave the outside shooting to the shooters. 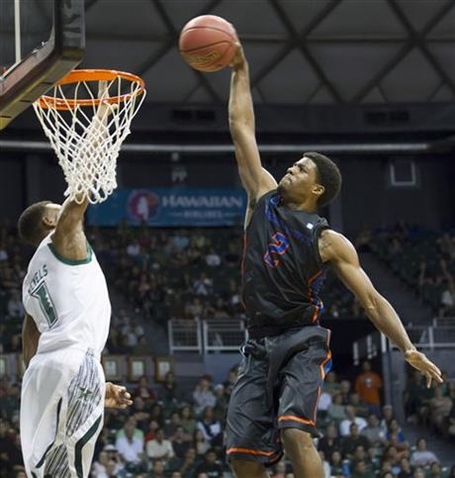 Derrick Marks throws down against Hawaii. 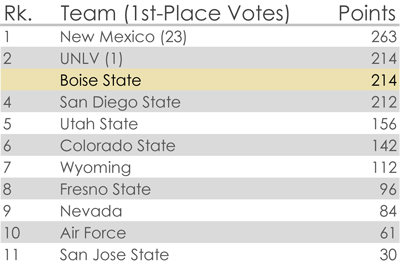 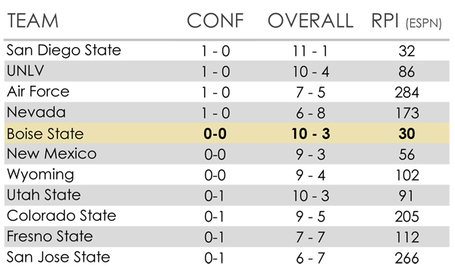 The Hair Thompson Non-Conference MWC Player of the Year

Arguably, New Mexico's Cameron Barstow (20.1 ppg, 7.2 rpg) or Kendall Williams (18.6 ppg, 5.3 apg) should take the Mountain West's Non-Conference POTY honors. They both have better numbers than Thames. Despite lagging both Lobos in stats, the redshirt senior from San Diego State has the Aztecs rolling who enter league play with a conference best 11-1 record and #21 national ranking. Thames is the main cog for the Aztecs and he has shown up when it mattered the most, scoring 26 and 29 points in wins against #20 Creighton and #25 Marquette, respectively.

Hats off to you, Mr. Thames!

The Good: Boise States has a much better RPI than at this point last year. The Bad: The MWC just isn't as good as last year which will cause that RPI to suffer heading into March. The MWC will more than likely only get three teams into the NCAA Tournament compared to last year's record-setting five teams. While the Broncos have looked lackluster at times (and unstoppable at others against over-matched foes), they are well-positioned to land one of the conference's bids. Just like last year, however, it will be a dogfight the entire way. Overall, I expect the team's experience, challenging non-conference schedule, and Taco Bell Arena's home court advantage to pay dividends down the stretch, leading to an upper echelon finish in the Mountain West.

Agree? Disagree? Will TBA be rocking like last March? What is your assessment of the players?