Jesse relayed the message last night and provided a heap of links for new running back verbal Cory Young, but local media have the credentials to actually talk to recruits...and that's just what B.J. Rains of the Press-Tribune and Chadd Cripe of the Idaho Statesman did.

Dylan Sumner-Gardner, the 4-star safety that flipped from Texas A&M to the Broncos in the wake of Marcel Yates departure has yet to set foot on Boise State's campus, but he's already putting in solid work on the 2014 recruiting class. He of the hyphenated last-name has been tweeting at fellow safety target Khalil Oliver to try to get him back in the Bronco fold and has now turned his attention toward 4-star QB (and Miami commit) Brad Kaaya. The two met at the elite high school camp "The Opening" and now DSG is trying to get Kaaya to consider the Broncos and it might be working:

"He told me he will take a visit to Boise State and he's keeping an open mind. I think he would be a key for our program."

Watch the the basketball team take on Nevada, without ever leaving OBNUG

CampusInsiders reached out to OBNUG and will be providing us with a live feed of the Broncos game in Reno tonight...so you don't have to brave the possibly NSFW pop-ups from some other less reputable live feed providers (I'm looking at you, firstrowsports). We'll have a live thread up for the game and the feed will be queued up before tipoff, so don't go too far.

Steve Caldwell is a journeyman defensive coach and the new skipper for the Broncos' D-line. He also has a magnificent mustache. 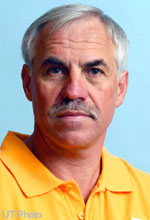