Derrick Marks' has fallen and he can't get up

So, the bad shot-selection at the end of the game wasn't the only embarrassing moment of the night.

20th-ranked Bronco wrestling team falls on the road to Stanford

The Broncos finished strong in their dual with the Cardinal, but opened with in a deficit after dropping some matches they probably shouldn't have and lost 19-12. The Broncos have a quick turnaround and will square off against CSU-Bakersfield tonight.

Broncos still need a QB in this class

And an interesting prospect might be coming back on the market. K.J. Carta-Samuels (yes, Austyn's little brother) has been committed to Vanderbilt for months, but if Vandy coach James Franklin indeed heads to Penn State, Carta-Samuels will likely re-open recruiting—and Boise State and UCLA seem primed to take a run at the 4-star signal caller. Boise State is also rumored to be after current Miami commit Brad Kaaya and has also been in contact with Butte College QB Thomas Stuart. Expect some signing day surprises this year (for once).

More amazingly, the lead car looked like this...and the driver is expected to recover. 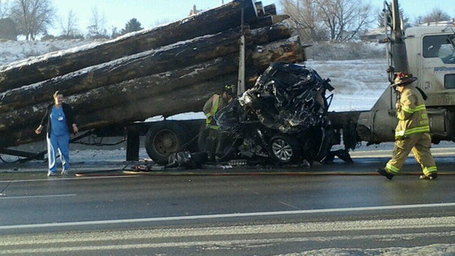