A little late this week, but every Sunday you can look forward to updated stats and records for the current batch of Bronco 2014 football commits.

The Chargers improved to 2-0 on the year with a 36-10 win over Warren on Saturday and Flowers came up big in the win, hauling in 4 TD receptions and finishing with 10 catches for 181 yards. In game one, Flowers had 171 total yards including a 69-yard TD. Churchill will take on Judson next week.

Greene led Serra to their second win of the season on Friday night as they downed Oceanside 50-39. In week one, Serra  rolled early and then held on for a 28-22 win over Desert Ridge. On the year, Greene 31-47 for 499 yards, with 7 TDs against just one interception. On the ground, he has another 236 rushing yards and 2 TDs. The Cavaliers will take on Notre Dame (not the South Bend variety) on Friday night.

St. John Bosco is also off to a 2-0 start after defeating Clovis North 48-0 on Friday evening. Fields had 5 catches for 72 yards in the win and now has 9 catches on the year for 228 yards and 2 TDs. Fields has also returned 4 kicks for 113 yards. Fields will look to lead his squad to a third straight win on Saturday against Chandler, AZ. 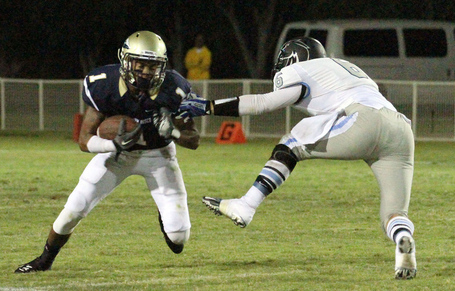 Modster's Mission Viejo squad improved to 2-0 on the year with a 58-35 win over Santiago on Friday night—their season opening win was against Baldwin HS in Hawaii. Modster had 2 TD receptions on Friday night—one a 5-yarder and the other a 27-yarder. No stats were logged for Modster in the opener. Mission Viejo will play Don Bosco Prep this Saturday.

Newport opened their season on Friday night with a win over Capital HS in Olympia, WA. I was unable to locate individual stats from the game, so if you are aware of their existence, pleas let me know. Sample's squad will look to go 2-0 when they take on South Kitsap this Friday night.

Lewis' PGHS squad moved to 2-0 on the season with a tight 14-12 win over Burbank on Friday evening (they defeated Rocklin in week one). Lewis was working himself back from a minor injury and doesn't appear to have logged stats in either of the first two games. PGHS will take on Nevada Union on Friday night.

La Habra is also 2-0 on the year after defeating La Mirada on Friday evening. In week one, they smashed El Toro 26-3. Gaines scored 2 TDs from a fullback position on Friday night (how Bacon-like of him). I've been hard pressed to find defensive stats for the big tackle so far, but I do know that he has at least 3 rushing TDs in the first two games. La Habra takes on St. Paul on Friday night.

Borah opened their season on Friday night with a 49-27 win over Meridian. I have thus far been able to locate stats from the matchup, but HERE is a nice little write-up on Mann from the Statesman. Borah will take on Boise this Thursday at Borah. Check it out if you can.

Rocky Mountain is off to a 2-0 start with wins over Lake City (CDA) and Vallivue, respectively. I have no full stats for Oliver yet, but do know that he blocked a PAT in week one and on Friday had a 1/2 sack. Will try to pull together full game stats when they come to light. The Grizzlies take on Meridian on Thursday evening.

Pearland has opened their season with back-to-back 49-0 shutouts...the last coming on Friday night against Fort Bend Kempner. As is generally the case, stats aren't usually posted for linemen but solid offensive numbers in both wins, show that Griswold is doing his part. Pearland will take on Memorial on Friday evening.

Another recruit, another 2-0 start. Edison opened their season with a win over Centennial and kept the ball rolling with a 14-0 win over Garfield on Thursday night. They'll take on Servite on the 20th.