Share All sharing options for: Three stars and one goat of Boise State's win over Tennessee-Martin

Well that sure showed us a lot. Sure, it was just Tennessee-Martin (a tasty cupcake in the words of @FakeCoachPete), but the Broncos desperately needed that victory, and especially the way it occurred. We learned Joe Southwick can throw a touchdown pass. That Burksewijn can be a serious threat if they play up to par. SWR is jittery as ever, and the Ajaltazombie will put defenders in the hospital. Oh yeah, one more thing: the Bryan Douglas bionic knee is gonna' be fine. Join me now as we look at the Three Stars and One Goat of Boise State's win over Tennessee-Martin.

Naming Three Stars is a hockey tradition that over the past few years has become a Bronco tradition.

There were significant concerns facing the Bronco secondary after the (gulp) loss to Washington. It was obvious that the Broncos were the fountain of youth when it came to covering experienced receivers. Bryan Douglas was the most experience Bronco on the roster, and even he was questionable after suffering a season-ending knee injury in 2012. Thankfully, despite the rough go against Washington, the Broncos came back in full force against Tennessee-Martin.

Bryan Douglas was the benefactor on more than one occasion of the Brett Favre gene. Douglas came away with two interceptions on the day, one of which was run back for a touchdown. The bobbled ball that ended up in the hands of Douglas was then zipped down the sideline for easy score. In total, Douglas returned his two interceptions for 62 yards and one touchdown. Douglas was flying all over the field, and is deserving as any for player of the game honors. Congratulations,  Bryan, on being Star No.3 of Boise State's win over Tennessee-Martin.

Runner Up: New MW logo on the Blue turf. Previously, the logo was the purple and gray of the Mountain West conference. The Broncos have finally removed the previous logo, and put in an Orange and Blue one, which looks fantastic.

Bronco play-callers received a boatload of criticism after the U-dub debacle. "Why wouldn't you put in your most dynamic play-maker on the team on more plays!" shouted some fans. Others screamed with the Red Queen of Wonderland: "Off with their heads!" Some also just cried a whole lot. It's no secret that SWR is arguably the most game-changing Bronco on the roster.

Injury rumors had been floating about, but Robert Prince was confident that SWR would be more involved in the offense going forward (take that for what it's worth). Thankfully, Prince was right and Williams-Rhodes was all over the place on Saturday.

SWR averaged  more than a first down every time he touched the ball. His escapability is second to none, and he is literally a threat to take it to the house every time he gets the ball. Shane wasn't only effective from the line of scrimmage, but was equally efficient in the return game.

SWR accounted for over 150 yards of offense on his own. Every time he touched the ball, I jumped out of my seat, ready for him to wiggle out of a defenders arms, and scamper into the endzone.

Congratulations, Shane, on being Star No.2 of Boise State's win over Tennessee-Martin.

Runner Up: new sound system. If you have heard the "before", and had the opportunity to hear the "after", you would be as amazed as I was. There were sounds and voices and they were actually intelligible! Bravo!

Well, well, well, Mr. Southwick. It sure was nice to see that you can indeed throw a touchdown pass. With all due respect, I was wondering if the Broncos would be facing a Zabransky type of roller coaster with Southwick. When Southwick is on a high, he plays as great as anyone. When he is on a low, he plays as bad as Dylan Favre. I was impressed with how Southwick bounced back from the Washington game. During the first series, it looked as if he was still playing games in his own head, losing the ball on a sack and seeming utterly lost on the sidelines.

Southwick however, came back, and tossed 5 touchdowns to 0 interceptions on the day.

Southwick just about averaged a first down with every pass, and thankfully, the deep-ball is intact. On more than one occasion, Southwick aired the ball out, showing that the Broncos are indeed a threat down the field. Burks, Boldewijn, SWR, and Burroughs were all recipients of big-time targets. Southwick composed himself, and led his troops when it mattered most. He did well enough that he took a seat on the sidelines for much of the second half. He had a first-row seat to a 50 yard Grant Hedrick run for a TD. And he saw the Patti-Waggoners come out in full force late in the game. Yeehaw. Congratulations Joe, on being Star No.1 of Boise State's win over Tennessee-Martin.

Runner Up: HD Video Board! WOW! I didn't even mind sitting in the SEZ! I could see everything happening on the far side of the field just fine because of this mammoth beast. Nice job, Coyle! 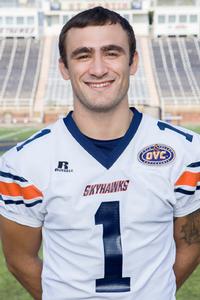 Dylan Favre. Familiar last name? It should be if you've ever watched professional football. The former Mississippi State quarterback is the nephew of retired quarterback Brett Favre. A dual-threat quarterback always scares me (curse you Kaep), and I have to admit that I was a little uneasy at the start of this game.

Thankfully for Bronco fans, Favre is the same type of gun-slinger as his uncle. Don't get me wrong, Favre holds just about every NFL record that a quarterback can hold, but that also includes interceptions. The gun-slinger mentality (see Matthew Stafford) is one that often comes with breath-taking, big-time plays, but is also riddled with interception after interception.

Favre threw 3 interceptions on Saturday against the Broncos. His 4.6 yard average isn't exactly anything to write home about. But more than anything, he came up short when his team needed him the most. And because of that, you sir are the goat of my article. P.S. can you get Uncle Brett's autograph for me? kthanx

I know, I know - Jay Ajayi also deserves a star. But I've only got so many stars, people! Honorable mention? Don't be too tough on me. How about that goat? How about those goat runner ups?! Sound off!