A merely fallen enemy may rise again, but the reconciled one is truly vanquished. —Friedrich Schiller

Share All sharing options for: Know your enemy: Tennessee-Martin edition

The Broncos know the best way to get over a bad loss is to win and win big. This is similar the way I get over bad losses, which is to eat a whole pizza and play Skyrim. Tennessee-Martin is coming off a win over Chattanooga and will enter Bronco Stadium tomorrow looking for their biggest win ever. It's my sincere hope the Broncos will keep them looking. Without further ado, it's time to know your enemy.

10) The city of Martin, Tennessee was founded in 1873 and named after Captain William Martin, a prosperous landowner who'd set up shop there a few decades before. In the 1850s, Captain Martin persuaded the Nashville and Northwestern Railway to run their line through his estates, and then 20 years later his sons begged a different railroad, the Mississippi Central, to divert it's railway through Greenbriar Blade, where the Martin estate now sat. The Martins donated land for the railroad's right-of-way and the railroad obliged. The townsfolk rewarded the Martin families decades of pestering railroad officials by renaming Greenbriar Glade "Frost", after a railroad official of the same name. BACK TO THE PETITIONS the Martin family went, and eventually persuaded the, likely irritated, townsfolk to switch the name to "Martin" in honor of family patriarch and chief railroad company botherer.

9) In 1900, a philanthropist named Ada Gardner Brooks donated a parcel of land in Martin, Tennessee to the Tennesee Baptist Convention and the Beulah Association of Northwest Tennessee whereupon they could build a school dedicated to religious and denominational training. They called the school the Hall-Moody Institute—named after Baptist ministers J.N. Hall and J.B. Moody (also founders of rock/blues trio known as Hall and Moody and Oates). By the 1920s the school had run into financial problems, and the school regents were set to consolidate the institution with Union University in Jackson, TN effective in the summer of 1927. However, fortune stepped in in February of '27 as the Tennesee State Legislature authorized the development of a University of Tennessee Junior College and hey...look at that one with a 'for sale' sign on it! The University of Tennessee Junior College opened in March of that same year and though it closed during the Depression and World War II, it hung on long enough to be incorporated into the University of Tennessee system in 1951. The school's Baptist founders celebrated with casserole and NO dancing. 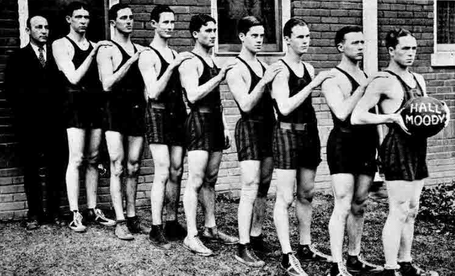 Apropos of almost nothing: an early Hall-Moody basketball squad

8) Tennessee-Martin athletics first competed starting in the Hall-Moody days and were known then as the Sky Pilots—which was a term for preachers in the day and also the name of a pretty rockin' Hall and Moody and Oates cover band. At one point, the sports teams competed under the nickname "Baby Vols" but probably got confused with THESE adorable little rascals and switched over to the "Pacers" until 1995 when they became their current iteration, the Skyhawks, and unveiled this mural in the student union. 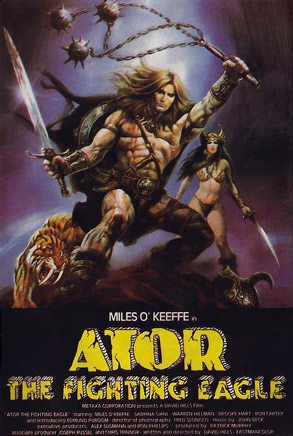 7) To find Tennessee-Martin's "Cumberland" game, you need look back no further than 1995—when the Skyhawks opened the proverbial can of such and such on (NAIA) Bethel University, and handed them 97 to 7 beating—Coach Don McLeary's high water mark for the year by far. In their very next outing, the Skyhawks—hungover from too much scoring—lost to Eastern Illinois 30-22 and finished a disappointing 5-6 on the year. Still, on a clear night Tennessee-Martin fans claim they can still see the old scoreboard lighting up and hear Don McLeary's low cackling. Spooky.

6) The yin to Don McLeary's yang was pitched in September of 1998, when Coach Jim Marshall's Skyhawk squad fell 76-0 to Tennessee State. Unsurprisingly, it was not Tennessee-Martin's only loss that year, in fact they reached bizarro perfection and finished 0-11. Still, Marshall was rewarded punished with another year at the helm, and kept the misery alive by going 1-10 the following season. Marshall was understandably canned after the '99 season, but the ship refused to right itself and the Skyhawks failed to win more than 2 games in a season for the next five years...that is, until Matt "the Angel of Salvation" led the 2005 team to 6 wins that must have felt like a hundred to win-starved UT-Martin fans. Of course, Griffin's ticker tape parade for himself was to immediately bolt for the Murray State HC gig. Luckily for UTM, current head man Jason Simpson took the reins and has led Martin to 4 of the school's 14 winning seasons since 1953. I would've thought it would have taken longer for McLeary's karma to wear off. Go figure.

5) Tennessee coaching legend Pat Summitt is known far and wide as a Volunteer, but during her playing days she was an All-American for Tennessee-Martin and is still their all-time leading scorer (1,045 pts). Summitt coached the Vols women's b-ball team for nearly 40 years and racked up a ridiculous 1,098 wins and just 208 losses...oh, and 8 NCAA titles. Obviously, this all serves to underscore the point that women are in no way equal to men...they're obviously much, much better. 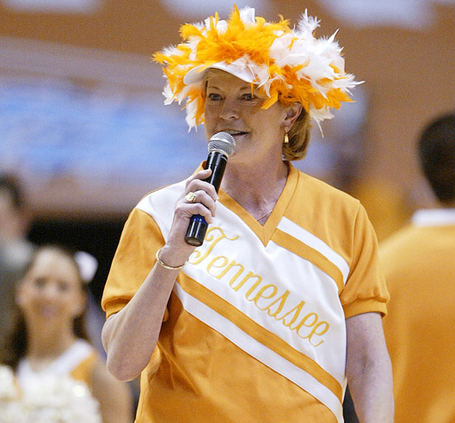 No Big Birds were harmed in the making of this hat.

4) While searching for obscure facts about Tennessee-Martin I discovered that one of the school's pop cultural claims to fame is being featured on a tee shirt worn by a band member in the Little River Band's music video for "Night Owls" and SURE ENOUGH.

Furthermore, after viewing the video to confirm that said band member was indeed wearing a UT-M t-shirt I discovered that The Little River Band is terrible. To think, without Tennessee-Martin, I might never have known that.

3) The official name of the Skyhawk mascot is "Captain", and according to the UTM athletics website, was so named because it's "gender-neutral and fits the concept of a mythical hawk that flies a plane." I think we can all agree that when naming a make-believe, anthropomorphic bird-of-prey that flies airplanes, it's always best to stay gender-neutral.

2) The gender-neutral Skyhawks play their home football games at 8,500 seat Hardy M. Graham Stadium named for longtime donor, surprisingly, named Hardy M. Graham. The stadium registers a 1.9 FANfare score on stadiumjourney.com and a reviewer had the following to say about the raucuous UTM crowds:

You'll likely notice times where an incoming cell phone will register the highest decibels in the stadium.

BTW, Bronco Stadium was given a 4.3 (out of 5) on the site, but I'm surprised we weren't docked more for the urinal troughs.

1) Eastern Kentucky is the bane of Tennessee-Martin's football existence, holding the distinction of having beaten them more times than any other team in their history without the Skyhawks returning the favor. As of last season, the Skyhawks trail the all time EKU series 1 win to 22 losses. UTM has lost to Jacksonville St. the most of any foe, with 27 all-time defeats, but at least have 7 trips to the win column in their long-standing series. From the six degrees of Kevin Bacon category, the Broncos have an interesting history with Eastern Kentucky as well, having defeated them to win the 1-AA national title in 1980 and then being bounced from the 1-AA national semifinals the following year by the Colonels. Oh, how the turntables.