Share All sharing options for: The Mountain West of Disappointment: Week 2 Preview

I was thinking about writing a weekly article about Mountain West football, and then last week happened and I realized I must write a weekly article about Mountain West football. Boise State laid the giantest of eggs, and that wasn't even the biggest story. Misery loves company, so isn't it great that we can all be miserable together? (Except you, Fresno State. You're out of the club.) 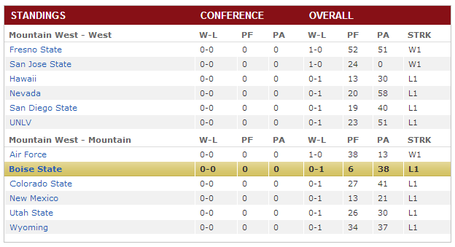 In short: It's week one, so there's really no need to draw sweeping conclusions and make broad generalizations just yet ... except that New Mexico might not win any games.

In short: The total margin of victory for the Mountain West in wins against FBS competition was 1 point. 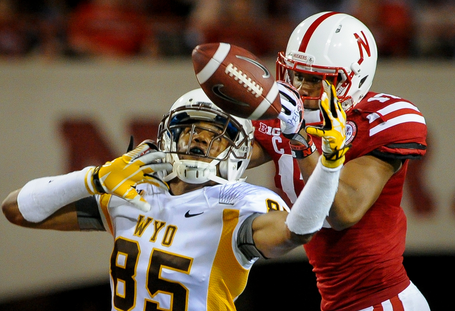 Team of the Week because there had to be one

The Wyoming Cowboys, by virtue of hanging with a Top 25 team and not losing to an FCS team, are the toast of the Mountain West and currently sitting in first place in the moral victory column, a full 35 billion moral victories ahead of Boise State. Wyoming gained 600 yards and came within a field goal of upsetting No. 18 Nebraska.

Derek Carr is the nation's leading passer after Week One because he threw two weeks' worth of passes against Rutgers (73 passes total, more than nine times how many passes Army threw last week). Still, I must give credit where credit is due. If you throw 73 passes and complete 52 of them for 450 yards and 5 TDs, you deserve player of the week and all the free Tommy John surgery you can get.

How good is San Jose State? Does San Jose State even know? This weekend will be the barometer of barometers as the Spartans travel to Stanford for the Cardinal's season opener.

After Week One, BYU's Max Hall is lighting people up.

Boise State's loss to Washington was big news on Twitter and, apparently, in San Diego where Aztec journalists were busy averting their eyes from the Stink Bomb in Qualcomm that was SDSU losing by three scores to directional Illinois. 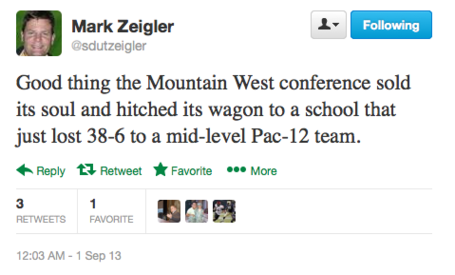 I'm sure Craig Thompson is proud to have San Diego State back in the fold, too.

99. Dancing with the Stars