My heart will go on

On Saturday night, the Broncos' gutcheck bounced. Now, it might be gutcheck time for the fans.

Share All sharing options for: My heart will go on

A funny thing happened on Saturday night and into the wee hours of Sunday morning. Normally, after a tough loss like the Broncos suffered at the hands of the Huskies, I really don't want to talk about it. I'll internalize my disappointment/sadness (and in this case, embarrassment), quietly grumbling to myself for a day or two until I start to feel better—usually fully rebounded by the time the Broncos take the field again. Saturday night, this was not the case...all I wanted to do was talk about it. To someone...anyone...or no one, as the case may have been when I kept reeling off tweets and diatribes into the wee, small hours of the morning (when you see the timestamps, realize I'm not THAT sick of a person, but rather had to be up all night for work anyway). 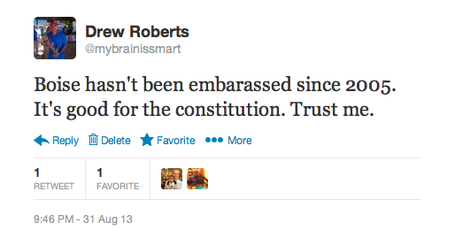 Accusatory (not hard to see where my ire was funneled) 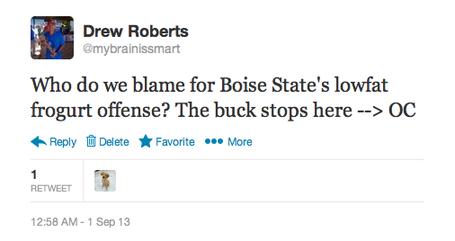 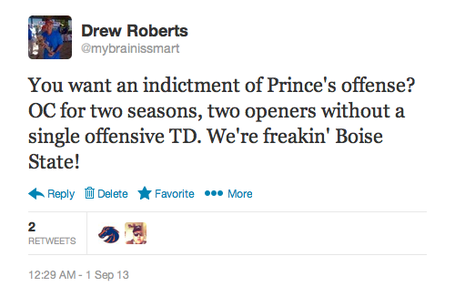 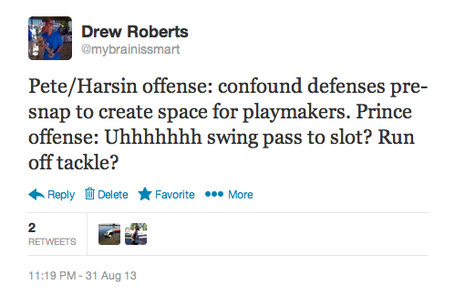 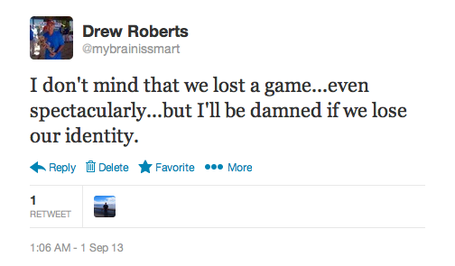 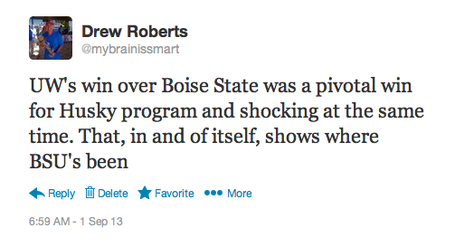 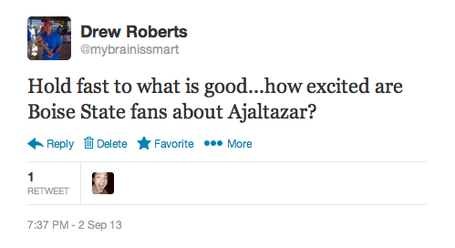 I wasn't just getting stuff off my chest—I was running the gamut of emotions after 9 months of impatient waiting for the return of a football team we love. That return stunk on ice. I've had my heart ripped out by the Broncos before (or rather, their opponents). I was in a daze for two days after UNR snuck past us in 2010. I struck the word "kicker" from my vocabulary after the 2011 TCU loss (also 'play fake' and 'Pachall'). This one felt different. The reason? I hadn't felt like this in a good 8 years, when the Broncos went down to Georgia and laid a giant Zabransky-sized egg. We were NEVER in that game in Athens back in 2005 and Petersen wasn't the coach. That's why it was shock and dismay that initially took hold when I witnessed a Chris Petersen-led team parlay a 10-3 halftime deficit into a absolute boatrace. If you think about it, the Huskies did to us what we've been doing to teams since the Bush administration. It's not nice.

What was I expecting? Not that. Which isn't to say I didn't think the Huskies would be game—I thought we had a stiff challenge ahead of us, but the last 7 years had given me the (entirely reasonable) opinion that the Broncos would be in the game right up until the closing horn. That the Broncos would score points in bunches...that something would break our way. In the end, nothing did. We were outplayed in all 3 phases of the game and frankly, all it takes is one. It was embarrassing, head-scratching and kinda sad. But through my cathartic 12 hour rant, I came around to a very Pete-like conclusion—it's never as good as you think and it's never as bad as you think.

Boise State had opportunities against UW...something they never had against Georgia in '05. Boise State had flashes of brilliance, like the ones from our two-headed rushing sledgehammer Ajayi and Baltazar. They also had errors and poor execution so glaring that they are easy teaching moments. Textbook even. In short, Boise State got roughed up for the first time in almost a decade and may come out better for it. The UGA loss spurred Boise to an unprecedented 7 year tear. The humanizing slaughter at Husky Stadium could do the same. I don't like losing, but the players and coaches DESPISE it. What we threw at the Huskies was supposed to work—it didn't, but by now, the coaches know why, the players know why, and the fans...well, we have our theories.

There's still a game another game this weekend and one the next...the Broncos have just started this journey through the 2013 season. I know they won't quit on each other, and that we won't quit on them. Some losses are more painful than others and we can be analytical about why one thing happened and not the other—but losses are also a powerful motivator, and the Broncos know that better than anyone. They've already moved on into what now looks to be a very interesting season. Give me another day or two and I'll follow suit.