Boise State and the Make-A-Wish Foundation have served up another dream weekend for a sick youngster, who will be given the star treatment at this weekend's Boise State football game. Minnesotan Shane Swanson was born with Spina Bifida so has faced some setbacks in life, but he hasn't let that douse his love of the Broncos or let it stop his athletic endeavors. The Broncos already rolled out the...erm...blue carpet for Shane when he flew in to Boise today.

Not that special, really

Southern Miss, losers of fifteen straight, may have found their one glaring weakness: fielding punts. Well, if said punt-fielding is done by the coaching staff, anyway.

Boise State has had their share of misfires this season, but the running game—headlined by The Ajaltazar, has been pickle-juice fueled mayhem. Southern Miss, on the other hand, hasn't been able to get their running game out of first gear...and the Arkansas game last weekend barely got them out of park. Can the team be starting to gel at the right time to add dimension to their offense for the Broncos to worry about?

Lawsuits were enough to get EA Sports to reconsider merely re-dubbing their "NCAA" football franchise College Football. Now they say their shelving the game for the time being given the dispute between the NCAA and student-athletes looking for compensation. I can tell you one thing, Drew Roberts, the 5'9" 240 lb. Heisman-winning Boise State running back with 4.2 speed hasn't sought a dime. A dime.

ESPN's Outside the Lines has an amazing piece on the redemption of ex-Boise State All-American (and convicted felon) Joe O'Brien. 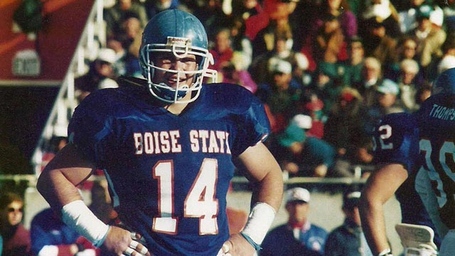