Share All sharing options for: The Mountain West Week 5 preview and power poll

I am five days and a dollar short in recapping the Boise State - Fresno State game, but too bad I'm sharing a nugget anyway. In losing, Boise State looked like a better team than I thought they were. The Broncos lost by a single point in a perfect storm scenario, losing the turnover battle, fumbling in the red zone, failing on fourth down, and making enough mistakes to lose by at least 20 points. Based on their first three weeks of football, Boise State could have lost that game by 20 without all the extra help. That they controlled their own destiny on the final drive of the game - not to mention the way they played throughout, despite scrimmage coverage for chunks of the game - spoke volumes to me about this team's potential. As such, I bumped them up a spot in the conference rankings. Homers gonna homer. 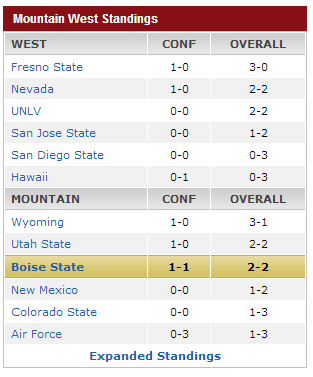 Recap: Two teams in Boise State's conference have a better overall record than the Broncos, and 2-2 is a win-loss record the Broncos share with ... UNLV?!

Recap: Keeping with the Mountain West's theme of 2013, no one beat any opponents outside of the conference or FCS. 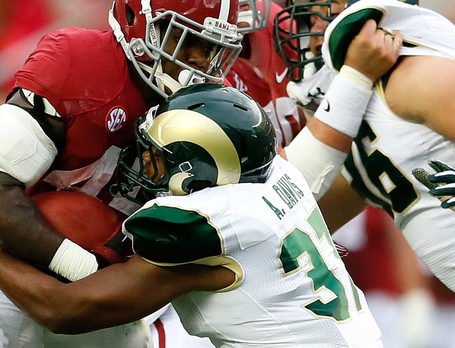 The Colorado State Rams, sad sack of the Mountain West, were going to get their lunch handed to them by No. 1 Alabama; it was just a matter of how much lunch. Turns out, not a whole lot!

The Rams trailed only 17-6 going into the fourth quarter in Tuscaloosa, which is a feat that many SEC teams cannot accomplish let alone 40-point underdogs. Colorado State ended up losing by 25, but their spirited play for a cupcake had Alabama players saying backhanded things like this afterward:

"I felt like as a whole, we didn't really execute to our full abilities," Alabama linebacker C.J. Mosley said. "That's not an SEC opponent that we just played and the win really wasn't what it should have been. So I felt like we kind of got away with a win. We didn't dominate that win."

Way to lose in an undominating fashion, CSU!

Derek Carr had 400 yards and four touchdowns in a big win over somebody, and that's all I know.

This week's ESPN Friday night game will be a showcase of Mountain West darkhorse contenders and former WAC powerhouses (powerhouses for one season at least). Winner gets a congratulatory email from Karl Benson.

Punter of the week

San Jose State's Harrison Waid got himself ejected for fighting Minnesota players, both the saddest and awesomest special teams news of the week.

History tells us he might have anger control problems.

Might want to keep an eye on Utah quarterback Brian Johnson this season. Through four weeks, he has 1,200 yards passing and 300 rushing. He's also a white guy.