The Chargers got back in the win column on Friday night to move to 3-1 after coming up with a big win against Wagner. Flowers threw a 9-yard jump pass TD to running back Nick Smisek in the win. No other stats were logged. Churchill takes on Madison this Friday.

Serra now sits at a perfect 4-0 after Greene led his team to a big 48-18 win over Dorsey on Friday night. Greene had 286 yards passing, 53 yards rushing and 6 total TDs in the win (4 passing, 2 on the ground) On the year, Greene has 1,057 yards passing and 13 TDs, with another 334 yards rushing and 5 TDs. Serra will face Narbonne this Friday night.

St. John Bosco moved to 4-0 on the season after topping Loyola 24-10 on Friday night. Fields had a 29-yard and 63-yard TD reception in the game, but full game stats have not yet been published. SJB will have 2 weeks to prepare for their next test againt Crenshaw.

Mission Viejo is now 4-0 after defeating La Habra on Friday night, 46-21. Again, Modster's stats were not logged either on Maxpreps or in the local paper. The Diablos will take on Aliso Niguel on Friday evening.

Newport defeated Woodinville Friday night to improve to 3-0 on the year. Infuriatingly, no stats have been logged for Sample so far this year. Newport will play Issaquah this Friday.

Pleasant Grove moved to 4-0 after posting a 33-19 win over Inderkum on Friday night. As I mentioned last week, Lewis has been brought about slowly after a preseason injury and played in his first game just a week ago—primarily on offense. On Friday, Lewis again got the buik of his PT on offense, where he rushed the ball 15 times for 96 yards and a TD and also returned one kickoff for 45 yards. He notched one tackle on the night on defense. Through 2 games, Lewis has 1 tackle, but has 20 offensive carries for 177 yards and 3 TDs.

La Habra dropped their Friday night contest to Sean Modster's Diablos to move to 3-1 on the year (it was falsely reported on Maxpreps last weekend that they'd lost to St. Paul). Thanks to a tipster, I was able to cull a few stats from Gaines' first 3 contests...prior to Friday evening, Greg had 21 tackles (5 for-loss), 12 QB hurries, and a tipped pass on defense and had also chipped in 5 rushes for 30 yards and 3 TDs. 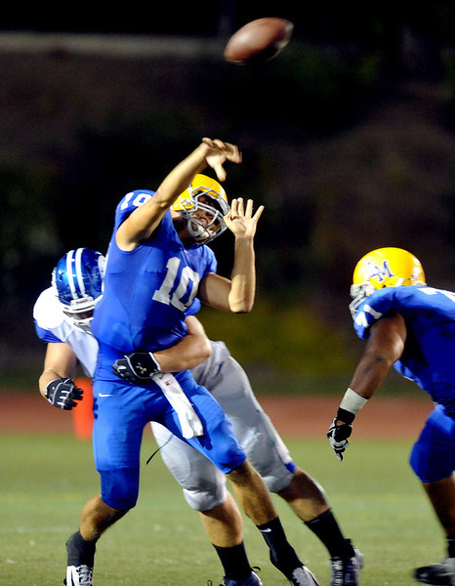 Mann played in his first game of the season for his new CA squad but they ended up on the losing end, dropping the contest to visiting Camarillo. Mann, who the local paper insisted had just transferred from "Illinois" , still came up big in the loss, despite vomiting and cramping throughout. Mann had 3 TFLs and 2 sacks in the contest, and also pitched in an 18-yard run...but Coach Keith Knoop was most impressed with his heart:

Hey, that's just how we grow 'em here in Illinois.

Burroughs now sits at 1-2 on the year with a matchup against Glendale looming on Friday.

Rocky Mountain got the rare honor of winning two games in one week...and doing so in spectacular fashion. The Grizzlies finished the weather-postponed game against Meridian on Monday night by a final score of 52-0 and then took on Boise on Thursday night, whom they dispatched easily 60-17. No stats were logged for Oliver in either win (HELP!). Rocky Mountain takes on Capital on Friday night.

Pearland remain 3-0 after sitting through a bye week. They'll take on Pasadena (TX) on Saturday.

Edison dropped their game against Servite on Friday and are now 2-1 on the year. Edison takes on Mater Dei on Friday night.

Boise State's newest verbal commit (and possibly biggest) has been doing work for Centennial this season primarily at MLB, which will be good practice since he's expected to play STUD when he arrives. His squad currently sits at 2-2 on the year after losing to Alemany on Friday night, but will have a chance at redemption against  Carson on Friday. No stats have been entered yet for Friday's game, but entering the contest, Johnson had 35 total tackles and 2 sacks to his name. He's scheduled to be in town Saturday for the Southern Miss game and should have teammate Tre Watson (RB, a Cal commit) with him.