Share All sharing options for: Three stars and one goat of Boise State's win over Air Force

I'll be the first to admit that the New York Time's Best Seller, 'Death By a Million Tiny Cuts' put a healthy dose of fear deep down in my soul. I was already worried about the triple-option attack of Air Force, but that just put me over the edge. Of course I had the looming memories of Air Force 2011 at Bronco Stadium, where the Broncos survived a million tiny cuts, but it sure was painful. Or maybe I just know how suspect our defense can be this year. Really it was a combination of the above, and I was downright worried about this game. Thankfully, the 'Stache lives on, and the boys came away with a big-time victory.

Naming Three Stars is a hockey tradition that over the past few years has become a Bronco tradition.

This is a really tough one. There were a handful of players that had absolutely phenomenal performances Friday night against Air Force. D-Law could really be replaced with two others on the list who had equally impressive games.

Coming off a suspension vs UTM (um hey - please stop doing that), many were waiting for Lawrence to finally have "that game" where he dominates defensively. Thankfully, D-Law stepped up and shut down the potent Air Force offense.

Although he didn't come up with the big sack against the Falcons, he was all over the place, constantly putting pressure on Awini and co. (tehehe). He stepped up big on a few 3rd downs and definitely helped put pressure on an otherwise unstoppable ground game.

Congratulations Demarcus, on being Star No. 3 of Boise State's win over Air Force.

Runner Up: Matt Miller/missing weanie race. Miller was phenomenal, having a career type of night, but was barely nudged out of the Stars by Demarcus. Thank heavens somebody yanked the weanie race from the jumbotron. Shame on you, pervert (said in old man Herbert voice).

The fans predicted that Jay Ajayi would be POG (player of the game) vs Air Force, and it seemed like he didn't disappoint. Jay made a few costly mistakes (blame the rain), but more than made up for it with an incredible night.

To say that Ajayi is the future of this program would be a gross understatement. I believe his jerseys and poster appearances may eventually rival that of Kellen Moore. He lives in beast mode. He is as deceptive as they come. Seemingly large and a "bruiser" type of runner, yet possesses the speed and athleticism to make you miss, and then beat you down the sideline. Had Joe Southwick not been one incompletion short of a perfect night, Jay would undoubtedly have been my Star No. 1.

Having said that, Star No. 2 is no short task. Congratulations, Jay. 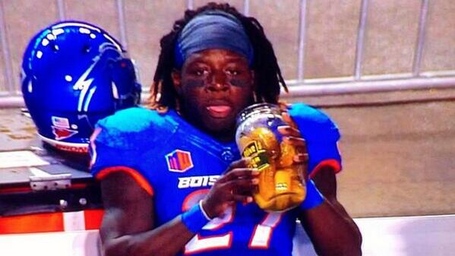 Joe Southwick had the game of his career on Friday against the Falcons. He started out 7 for 7 before an incomplete pass (that should have been a PI).  He went on to only miss one more pass throughout the rest of the game.

Southwick averaged first down every time he tossed the ball. They weren't all long, deep balls either. Southwick was the author of "death by a million tiny cuts", crippling Air Force with lots of 8-12 yard throws. Thankfully the receivers were pushing and picking up big-time yards after the catch as well. Ajayi's running softened up the D, which allowed Southwick to pick them apart. He also set an NCAA FBS record with his 93.5% completion rating.

What was equally impressive to me was his running ability. He rushed for 53 yards on 6 attempts. He was NOT sliding short of the sticks, or running out of bounds at the first sign of trouble. He had killer instinct, and took the ball himself on more than one occasion. It was great to have that additional threat that seems to have been lacking the last several years.

Congratulations, Joe, on being Star No. 1 of Boise State's win vs Air Force.

Runner Up: The 'Stache. I don't care what you say, "it's only weird if it doesn't work". And it's working.

In an effort to not zero in on one poor performance (looking at you, Corey Bell) during such a bright victory, I'm calling the goat stupid, silly stuff. And thankfully I can roll a lot of stuff into the stupid and silly category. How about 5 penalties for 55 yards? How about two chop-blocking penalties in a row? How about a 4th and 1 with Air Force in the red zone, Awini rolls out, tosses an incompletion, and Corey Bell basically headbutts him at the end of the play to keep their drive alive. Personal foul. Stupid. Silly.

How about Ajayi fumbling TWICE (thankfully one of which we got back). But how often does that really happen? Silly. Anyone see Tyler Horn with that roughing the passer call? Automatic first down. Stupid. If we clean up the little stuff, that could have been a near perfect game against a formidable opponent. I think Coach Pete lights some guys up this week and the Broncos roll into Fresno on a high next week. Also, next Friday is my birthday and if they pull this stupid, silly stuff again, I'm gonna be really grumpy.

Runner Up: The rain. Blame it for Ajayi's fumbles, and for the stands emptying at the first drizzle. Grr.