"Who asks whether the enemy was defeated by strategy or valor?" —Virgil

The Broncos got back on track last week with a healthy dose of cupcake, but their first Mountain West matchup of the year should be a real doozy. The Falcons of Air Force will visit The Blue this evening to run their dizzying array of ball rushing known as the Triple Option (note: Troy Calhoun doesn't think they run the triple option...don't tell him otherwise). It's an ESPN showcase game, so be there or be a regular quadrilateral. The game's been hashed, rehashed and then some...might as well know your enemy for the week, who's really actually made up of our close, close allies. Frenemies?

10) The United States Air Force was formed in 1907 as the Aeronautical Division of the Army Signal Corps and just a few short years after Orville and Wilbur Wright risked life and limb at Kitty Hawk. The Aeronautics division didn't formally become the "Air Forces" until 1947 with the implementation of the National Security Act of 1947. FUN FACT: The National Security Act of 1947 was signed by President Truman on his personal C-54 airplane, which was nicknamed The Sacred Cow.

9) The Air Force Academy, located in Colorado Springs, CO was founded in 1954—making them one of the youngest major institutions in the country—and just a shade over 150 years younger than the US Military Academy and about 110 years younger than the Naval Academy. It should also be noted, that the modern Air Force does not hold shirtless beach volleyball tournaments on the weekend, despite what Top Gun has led you to believe...oh wait, Top Gun was a Navy unit? Then I'm really not that sure about the shirtless volleyball tournament thing. 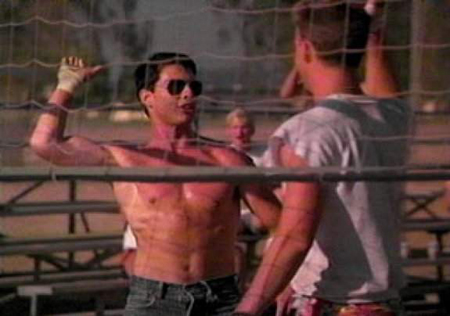 8) Air Force played their first collegiate football game in 1956 and did surprisingly well. Well, maybe not surprising, since I've gathered from movies that in the '50s, most excercise regimens were comprised of doing high knees, boxing kangaroos, and tossing around medicine balls—military personnel would have a distinct advantage. 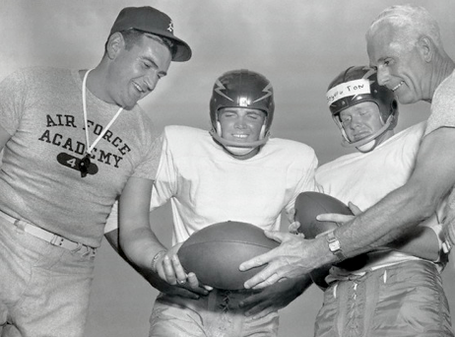 7) Female cadets were expressly forbidden from attending any of the service academies prior to 1975 when president Gerald Ford fell down a flight of steps and then signed legislation making it so. In 1976, the Air Force Academy was officially open to all chromosomes and 157 female cadets enrolled at the school. Not everyone was happy about the admittance of the fairer sex, and to this day the class of '75 notates themselves in reunion and alumni publications as the "LCWB". I'll let you figure that one out for yourselves, suffice it to say, it doesn't stand for "Left Coast Wine Bar". What exactly forced the integration of the academies in the '70s is up for debate, but many say it was due to Betty Ford doing a lot of nagging.

6) Attending the Air Force Academy isn't as simple as getting good test scores or having a high blood-alcohol level (University of Idaho)...you have to meet a much more stringent set of qualifications to become a cadet. First and foremost, you must be a U.S. citizen, although exceptions may be made if the entrant is invited by the Department of Defense...ooh...can we get Van Damme? Secondly, the prospective cadet must be unmarried and have no dependents (this rules out Kevan, as he is married and lists Mr. Fiskers as a dependent). Third, you must be of high moral character—I like to call this one the "3 Rs" rule...no ruffians, riff raff, or rascals. Lastly, you must be between the ages of 17 and 23 and pass a battery of medical and physical tests (ie, can't be "4F" on account of the ear or otherwise). On top of those standards, a cadet must produce a "nomination" from a U.S. Senator or Representative. I'd like to think that the nomination needs to be written in blood using a quill made from a bald eagle feather...but I think they abandoned that requirement around the same time the let the ladies in.

5) AFA classes don't really have the same class structure as a regular university might, therefore, incoming cadets (who elsewhere would be referred to as "freshman") are known as Fourth Class Cadets while "seniors" are known as "firsties" or First Class Cadets. All of this is well and good, but it does make a liar out of former Bronco headman Dan Hawkins, who claimed there were only two types of class—first and none. 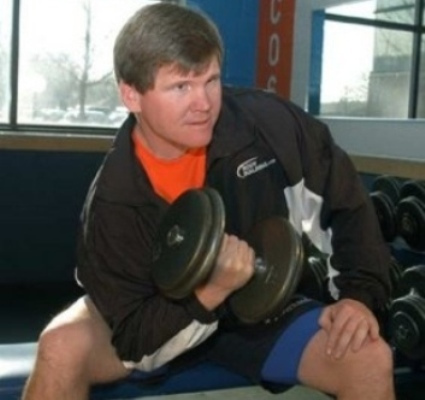 4) The falcon has been the official mascot of the Air Force Academy since 1959, when it was selected by popular vote (remember, this was before females were admitted, otherwise they might have been the Ponies, or the scented lip balms—I really know women, don't I?). The official mascot's name is simply "the Bird". Oh...haven't you heard about "the Bird"? Well, I don't want to go telling tales out of school...but I have it on good authority that "the Bird" is the word—keep that info close to the chest. Since 1955, live falcons have also been trained at the Academy and in general 12 falconers (3 from each class) train birds every year for exhibitions and home football games. Now you know why entrance to Falcon Stadium is forbidden if you have a live mouse in your pocket (frankly, I'd discourage it anyway). 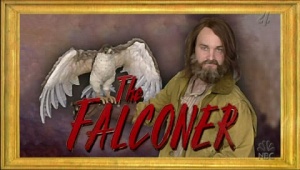 3) The Air Force Academy is guided by the core values of the United States Air Force, which are Integrity First, Service Before Self, and Excellence in All We Do. It's your pretty standard IFSBSEIAWD policy, really and Bronco Mendenhall has been on Troy Calhoun to get that on the back of the jerseys for over a month.

2) The Falcons play their home games at Falcon Stadium (capacity 52,480) and have since 1962. The stadium the second highest in Division 1-A at 6,621 feet above sea level, so if you're sitting in the nose bleeds, you probably actually have a nose bleed. Furthermore, the stadium has astonishingly lax security for a service academy as not once, but twice have Navy MidShipmen snuck in prior to their annual rivalry game to creatively mess with the large "Air Force" lettering emblazoned on the stadium seating. First, the intrepid Midshipmen snuck in and changed the lettering to read "AIR FARCE" and then the second time were fresh out of ideas and made the letters read "CHAIR FORCE". Maybe OBNUG should lend Navy the anagram server before this year's game. 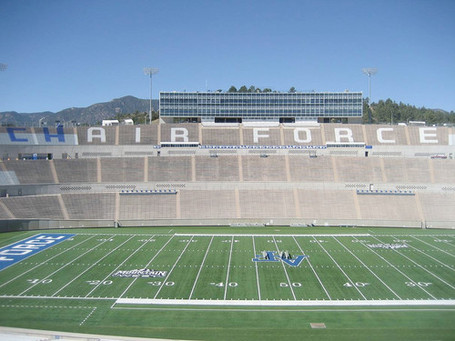 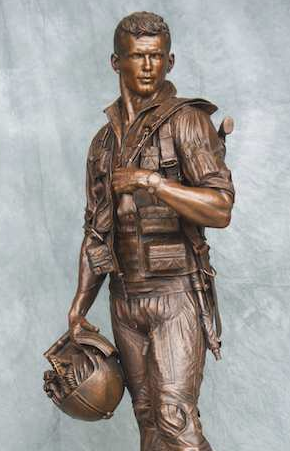