Share All sharing options for: The Mountain West of Baby Steps: Week 3 Preview 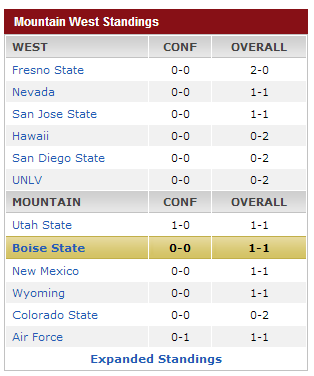 In short: The Mountain West has exactly one undefeated team after two weeks of play.

In short: It is now considered a good week when no Mountain West team loses to an FCS school. So week two = best week ever! 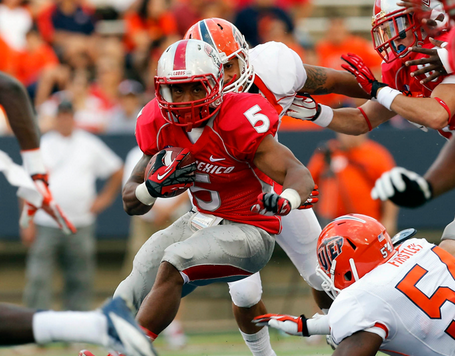 I was tempted to put Utah State here for their annihilation of Air Force (on the scoreboard, not on the field, as Chris Petersen's film study would warn us). But how often am I going to get the chance to highlight New Mexico? Maybe never again, so here goes nothing.

The Lobos pulled off an overtime win at UTEP, thanks to Kasey Carrier's 291 yards rushing - almost three whole football fields - and 395 yards on the ground a team. The Bob Davie Footbaw Plan worked like gangbusters, and now the Lobos are halfway to their season goal win total, a total I set because I don't think they will be very good this season but do still have New Mexico State and Colorado State on the schedule.

Chuckie Keeton accounted for 430 yards and five touchdowns in Utah State's win over Air Force, prompting one to ask, "Where is Keeton's Heisman campaign?!"

(Kellen Moore is officially the only quarterback to never have his own Heisman campaign.)

No, I did not forget that Colorado has Sun Belt talent behind that Pac-12 facade. But it would appear that new head coach Mike MacIntyre has the Buffs headed in the right direction, playing easy teams to get there. Fresno State is not an easy team, so we will find out what all that improving is good for come Saturday. Fresno is a 10-point favorite in Boulder, and believe you me, that point spread would have been two times higher a season ago.

TCU freshman Andy Dalton played a sensational game against Texas because I found a used Game Genie at a yard sale. He will be a player to watch this season, so long as this piece of gum stuck in the Game Genie doesn't move.

4. The Horse That Played Centerfield