Roundtable: Which Boise State player are you most looking forward to watching this season?

Share All sharing options for: Roundtable: Which Boise State player are you most looking forward to watching this season?

Today we play favorites by revealing who our second-favorite Boise State players are behind perennial No. 1, "all of them." In some cases, these might not be favorites, per se, just players we're excited to watch. But enough picking nits. Let's get to it.

Which Boise State player are you most looking forward to watching this season?

This is like choosing which child you like best. Arggh, it was so much easier when Marty Tadman was on the roster. OK, rubber meets the road, I am most excited about Demarcus Lawrence. Sorry, everyone else, but Lawrence plays the kind of football I admire (dominating) at the kind of position I love (lineman). He was nigh unblockable last season, and it was mostly a silent "nigh." After an offseason of getting better, he's going to be the most disruptive player Boise State has had since Billy Winn in his prime. Then he's going to the NFL. Best enjoy him before he's a New York Jet.

Jay Ajayi and it's not even that close (although Kevin Keane did long-snap into my heart this spring). Ajayi is just an entirely different type of running back than we've had before. I'm not saying that he'll be better than Doug Harper, but he may be more fun to watch. Considering the smallish backs that the Broncos are used to fielding, Ajayi is practically Christian Okoye and I don't think the Mountain West has a Steve Atwater to stop him.

The best part about Ajayi is that he looked like he could have been utterly dominant in a starting role last season and admittedly wasn't playing at 100%. To me, Ajayi has the most potential for "how'd he do that" moments this year. It's just a shame he'll never get the opportunity to truck Shiloh Keo.

I'm an offense kind-of-guy. I like scoring. I don't like Alabama vs LSU. Sure, defense is great. And yes, I'm pumped to see Demarcus Lawrence cause great bodily harm to Derek Carr. However, nothing quite does it for me like touchdowns, over and over again. Because of this, I am most excited about Jay Ajayi.

As I mentioned in our first roundtable, I believe he is also the player the Broncos can not afford to lose. He's gotten faster, and is now playing at 100%. He can make you miss, and run you over. I believe he'll be a future first-round pick, and will have no problem rushing for 1,000+ yards this season.

I am the biggest Jay Ajayi fan out there (I'm only 5'9", so that's figurative, not literal). I still watch his recruiting video on YouTube when I want to have a good time on a Friday night. The player I am most excited to see, however, is Matt Miller. What? Matt Miller? I have to admit, I have a pass first mindset, always have and always will. There's a reason the keepers in my fantasy league have been Megatron, Wes Welker, and Victor Cruz (although I had to begrudgingly keep Alfred Morris this year... too much value). 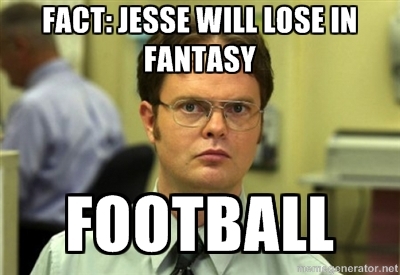 But, Matt Miller is boring. Horse Apples. Matt Miller is a stud. He is a great technical receiver and is WAYYYY more athletic than he gets credit for. I once had the pleasure of watching him take an alley-oop off the backboard (from Joe Southwick, of course) and two-hand slam it over another kid. It was ridiculous. I was so thankful I wasn't the kid getting posterized. If you have kids who want to play receiver, have them watch tape of Matt Miller. He runs precise routes, blocks like he's a tight end, and has unbelievable hands and concentration.

Mark my words: Matt Miller will be an NFL wide receiver and he will set the single-season record for receptions this year. Currently, that record is held by Jeremy Childs with 82. I must be feeling spunky today with all of these predictions.

It's like I'm being asked which color of M&M I like best. (It's green, by the way). I have a soft spot in my heart for the players who are most likely to decapitate an opponent. That's why I liked Jeron Johnson and Winston Venable so much. With that in mind, I'll have to go with Jeremy "hand of Saruman" Ioane. We saw flashes of his manhunting play last season (plus a really sweet cartwheel interception), and I have a feeling he is ready to bring the pain during this, his redshirt junior campaign. It seems like it has taken some time to get Ioane game-ready and on the field, but we have not been disappointed with what we have seen. This is the year he is comfortable at his safety position, and we all get to enjoy the product.

The Broncos are the most fun to watch when there is a bruising, fast, powerful back that forces defenses to open up the middle of the field behind the linebackers. For all of DJ Harper's wonderful attributes (i.e. having bionically rebuilt knees), he did not force linebackers to come up to defend the run the way that I hope Ajayi will be able to this year. An open middle of the field makes Joe, Matt, and SWRV happy. And if those three are happy, everybody gets milkshakes.

Go ahead, don't be shy. Share in the comments which Boise State player you are most excited to see this season. Then tell us which one of us was right by answering the poll question below.