We have 23 days until Boise State kicks off its season against Washington, so today we highlight No. 23 on the Bronco roster: Derrick Thomas.

Thomas committed to the Broncos in December, following a 1,600-yard, two-year career at Butler Community College where he shared the backfield with fellow JUCO transfer Dreamius Smith, a West Virginia recruit. Combined, Derrick and Dreamius (coming this fall to Bravo!) had 1,800 yards in just 12 games, helping the Grizzlies to an undefeated regular season and a No. 2 NJCAA ranking. Thomas saved his best for last, rushing for 100 yards in each of Butler's final four games, three of which were of the playoffs variety.

After the season, Thomas's suitors included Mississippi, Tennessee, and the University of Idaho, the latter of which was met with great guffaws in the Thomas household.

Sidenote: On his visit to Boise, Thomas took a picture at the Bronco athletic facility. He is about 1,000 times less thrilled to be next to Chris Petersen than I would be. 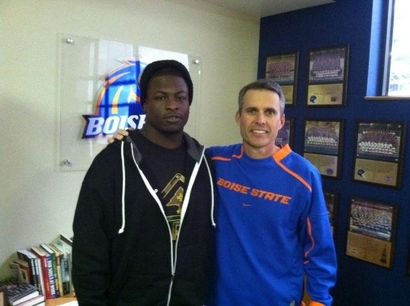 Djimon Hounsou with a Julio Jones 'do 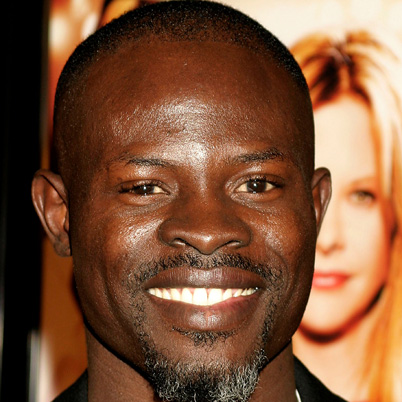 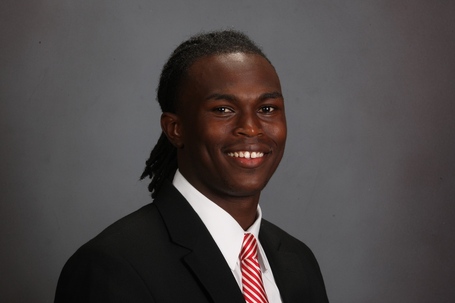 Thomas's best statline of 2012 came in the playoff opener against Garden City (not Garden City, Idaho, I'm pretty sure) where he went off for 115 yards and two touchdowns on just seven carries. Butler won 58-17, so yeah, maybe it was Garden City Idaho's football team.

That is the question facing the Boise State Playing Time Computer this season. Despite having spent zero time with the Broncos during an actual football season, Thomas is the senior member of the Boise State running back committee. He is a grizzled junior to everyone else's baby-faced sophomores and in utero freshmen. Oh the football Thomas has seen! That's got to count for something, right?

Experience is a valuable commodity in the Boise State backfield because every single other running back is an absolute stud. Beyond Jay Ajayi's studness, the studliest of the studs appears to be Jack Fields, a Chris Petersen favorite, who played last season as a true freshman and figures to be one of the lead candidates to backup Ajayi this fall. Thomas is a stud, too, as evidenced by his strong showing in spring football where he generated all-important buzz among coaches and media. Buzz is the Holy Grail of football you can't see. Speaking of football we can't see, the petering stream of news from fall camp has yet to reveal how the running back depth chart might shake out, other than Charles Bertoli ran for a 65-yard touchdown yesterday. Charles Bertoli is the starter? Probably, who knows.

A note about running style: Derrick Thomas will run you over. So will Jay Ajayi, and so will Jack Fields. The Boise State running game might be the most brutal it has ever been, regardless of who is running the ball.

Derrick Thomas calls Pittsburg, Texas, home. You might be interested to know that Pittsburg, Texas, is an inhabitable amusement park based on the city of Pittsburgh, Pennsylvania, featuring amusement park rides, a 1/64th-scale Lego replica of Ben Roethlisberger, steel welding competitions, animatronic ketchup, and all park visitors leave with dangerous LDL cholesterol levels.