No enemy is worse than bad advice. —Sophocles

Share All sharing options for: Know your enemy: Washington edition

For the first time in Know your enemy history, we're graced with the same opponent twice in a row, and so it seemed a waste to have to jettison so much good info. Below you'll find some of the bowl games foundational factoids with a few new ones thrown in for good measure. The season has begun...it's time to know your enemy.

10) The area now known as Seattle, Washington was first inhabited by Native Americans some 4,000 years before whitey came to town. The city itself is actually named for a hereditary chief of the Suquamish and Duwamish people, which, when anglicized, translates to "Starbucks" and "Tullys". Arthur A. Denny and a group of white settlers arrived at Alki Point (the westernmost point in modern-day Seattle) in 1851 and decided the site was sufficiently damp for his party to form a settlement, which they did. They moved the site a bit east of Alki Point in 1853 and named it "Seattle". I was unable to confirm the fact that Denny was the namesake behind Denny's restaurants, but historical records do point to him trading "Moons Over My Hammy" with the natives.

9) The University of Washington was founded in 1861 as the Territorial University of Washington after territorial governor Isaac Stevens recommended such an establishment. The founders were unsure where exactly to put the campus so elected to set up two universities—one in Seattle (thanks to one Arthur A. Denny) and another in Lewis County, but then back-tracked and decided that just one university would suffice and it would be in...you guessed it...Lewis County (provided locally donated land could be found). Alas, no one wanted to part with their precious land, so it was back to Seattle they went, where they found a guy that was straight-up giddy about forking over some of his land...yeah, it was Arthur A. Denny again. "Denny's Knoll" ended up being the first 10 acre lot that TUoW rested upon...it now encompasses 703—and yes, the knoll was grassy.

8) UW played their first game of collegiate football in 1889 against "Harvard and Yale Alumni", but the coachless squad lost 20-0 to the presumably ascot-clad 30 year-olds from the Ivy League. The following year, the team played another single-game schedule and finished with a much better record—a 0-0 tie against Washington College that the local paper called "as entertaining as needlepoint". The very next year, the squad finally procured a coach...one William B. Goodwin, who led the team to its first ever win, a 14-0 romp over Seattle AC and their third ever loss, a 28-0 thumping at the hands of...Seattle AC. Things went on like this for the next few seasons...2 or 3 games a year that generally resulted in losses or generous amounts of yawning, but finally, coach Ralph Nichols procured the winning formula (possibly from a traveling band of gypsies) in 1895 and led the team to a 4-0-1 record with program-defining wins over Seattle AC, Vashon College, Tacoma AC, and...oh...Vashon College.

Thus went the see-saw of Washington football until 1908 when a fellow named Gilmour "Gloomy Gil" Dobie took the reins and proceeded to NEVER LOSE A GAME. Seriously, Gloomy Gil coached the squad to 58 wins in 61 tries between 1908 and 1916 and only thrice tasted non-victory—not losses, mind you, but 3 ties...a 6-6 tie with Washington State and two 0-0 stalemates against Oregon and Oregon State (respectively). Maybe the most impressive was that at Dobie's previous job, coaching North Dakota State, he'd never lost a game either and after moving on from UW, he led Cornell to 3 straight undefeated seasons. All told, Dobie won 182 games in his career, with just 45 losses...nearly all of which came after 1923. In his first 18 years of coaching, he lost just 5 games and went undefeated 14 times. Well, I'll catch you guys later, I'm off to get a Gil Dobie tattoo now. 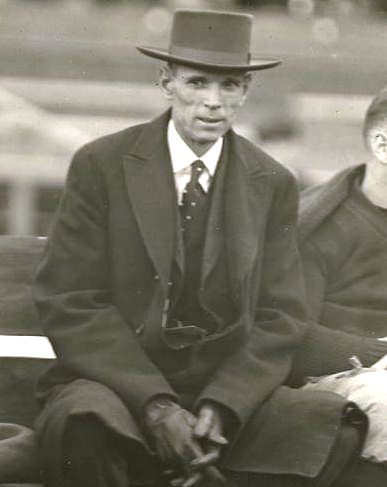 There is a reason he looked and dressed like an undertaker. His teams were going to kill you.

7) Aside from being the host of Soul Train (I think) Don James was also a legendary Huskies coach. Now, we’re not talking Gil Dobie levels of legendary, but he does have the distinction of leading Washington to a national championship...a feat Dobie never accomplished because he was out strangling the Kaiser or something. James was born in Massillon, Ohio in 1932, which is fortuitous because Massillon is known as a bit of a football mecca—home to one of the first ever professional football rivalries between the Massillon Tigers and the Canton Bulldogs and currently a high school football Shangri-La. James graduated from Massillon High in 1950 and went on to play QB for Miami (FL), setting school records and probably inventing Gatorade. James’ collegiate head coaching career began at Kent State in 1971, and while he won a MAC conference championship in his second season, he hit what is known as the "MAC ceiling" and departed with a 25-19-1 record in 1974 to take the reins of the Husky program.

Clearly, the sea air and espresso were good for James’ constitution as he started the Dawgs on a path now known as the "NDGA" or Non-Dobie Golden Age of Washington Football. In his 18 years at the helm (1975-1992), James won 6 outright Pac-10 titles and an undefeated national championship in 1991. The good times looked like they’d last forever for James and the Huskies, but then just a year after the school’s *first national title (and a few months after another Pac-10 title) James resigned his post in protest after an NCAA investigation and subsequent sanctions over violations that ranged from "oh really?" to "you don’t say?". James never coached again, but the NCAA learned their lesson and never levied another poor judgement in their storied history. 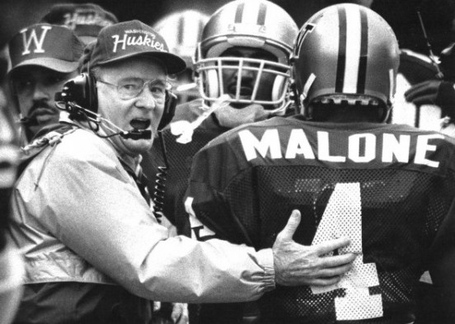 6) Washington's sports teams have only been known as "The Huskies" since 1922, prior to which they were known as the "Sun-Dodgers" in an obvious allusion to the fact that Seattle is partly- to mostly-cloudy for the better part of the year. It also may have referenced the fact that Sun Microsystems passed up Seattle and chose to put their headquarters in Santa Clara...but we may never know. The school mascot during the Sun-Dodger phase was named Sunny Boy and was a childlike imp that looked like Will Rogers suffering from dwarfism (Exhibits A–Z). Sunny Boy (really, only ever a statue) was retired in '22 when the Huskies moniker was adopted and soon live Siberian Husky sled dogs were accompanying the football teams to the field. The current iteration of the live UW mascot is named "Dubs" and is actually not a Husky, but an Alaskan Malamute. Washington...you sit on a throne of LIES!

5) Seattle's Puget Sound is the proud home of Panopea generosa or "geoduck" (pronounced 'gooey duck'). The geoduck, though it sounds like an earthenware Mallard, is actually a species of very large, edible saltwater clams. Of course, when I say "edible" I'm taking this only to mean "non-toxic" because looking at one doesn't exactly fire up the old palate. Avert your gaze! 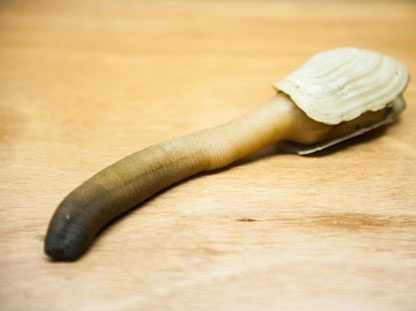 4) Possibly not the oldest, but definitely the bitterest of Washington's rivals would be their counterparts in Pullman—the Washington State Cougars. The UW-WSU rivalry began in 1900 and ended in a 5-5 tie, but WSU owns the first win in the series—one they got the following year by defeating Washington 10-0. Out of the 105 meetings between these squads, the Sun Dodgers/Huskies have won 67 and they've played virtually every year since the get-go...they even played twice in 1945 for missing a WWII-forced postponement in '43 and '44. The two teams competed for the Governor's Trophy up until 1962 when the game and corresponding trophy were renamed The Apple Cup to celebrate Washington's apple crops and Washingtonians love of keeping the doctor away. UW's largest win streak in the series is 8, while WSU's win streaks have topped out at 2. However, WSU scored 21 unanswered points in this year's contest to defeat the heavily-favored Huskies, so "put that in your pipes and smoke it" say Cougar fans everywhere (if there are Cougar fans everywhere, that is).

3) In 1889, a careless cabinetmaker started a fire that eventually consumed 31 blocks of mostly wooden buildings in Seattle. The buildings had been built on tidelands and were prone to flooding, so when it came time to rebuild the parts of the city lost to the fire, the city leaders made two decrees. The first was that the buildings be made only of brick and stone, as to prevent the tinderbox effect that caused the first conflagration—the second was that the streets be regraded so that the street levels of the new buildings were one to two stories higher than before. The second rule would presumably keep flooding to a minimum and ensure that the toilets wouldn't back up at high tide. The subsequent construction created a series of below-street-level walkways and businesses that were abandoned once the new sidewalks were completed (well, that and fear of plague), but the seedier elements of the city continued to use the underground buildings and walkways (now tunnels) as they were perfect for brothels, speakeasies and opium dens. You can still visit the "Underground Seattle" sites to this day, although I'm told you have to watch out for the eyeless mole people that reside there—they never evolved into hipsters like the rest of the Seattle populace. 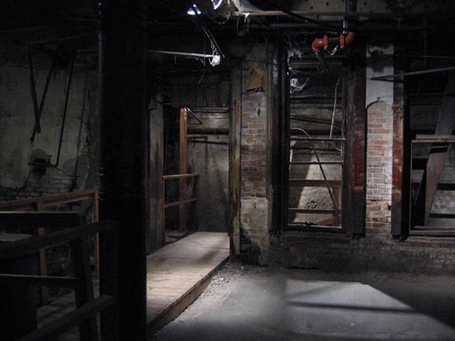 Who wouldn't want to hang out here?

2) Most visitors to Seattle swing by the historic Pike Place Market, but those that take a wrong turn might end up at the Post Alley Gum Wall, which—considering that it's in Seattle—is exactly what it sounds like. Legend has it that Bazooka Joe once visited the semi-quasi-famous wall and added his own stick of rock hard chewing gum. If this attraction isn't gross enough for you, you can always walk a few blocks and check out the Ballard booger bridge. 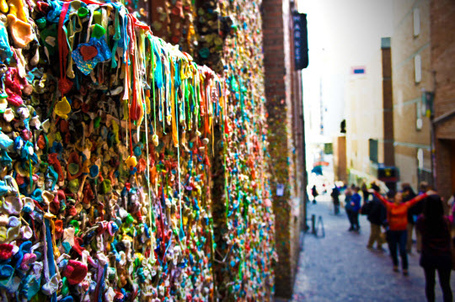 1) Time to get excited, theoretical physicist fanboys, because none other than Vitaly Efimov is an affiliate professor at the University of Washington. Efimov, of course, is the man behind the hugely popular Efimov State which is soon to be a sitcom on CBS. The Efimov State is a proposed exotic state of matter in which three identical bosons interact, with the prediction of an infinite series of excited three-body energy levels when a two-body state is exactly at the dissociation threshold. I would've gone with four identical bosons, but hey Vitaly, you're the "expert"

*Hard to believe, but before the current flawless system of choosing national champions, a mathematical model and polls were used to determine champs (pfft...glad we never have to worry about those two things nowadays). Therefore, prior to 1991 UW had been in the national championship discussion, but was never officially "recognized" as champions. Well done, rhesus monkeys that control football.