Tomorrow we can stop rounding up. Game time is near.

Just on the uphill side of a week until kickoff, so today I'll highlight one of the players to wear #8 for the Broncos—Demarcus Lawrence

Lawrence took a roundabout path to The Blue™, but man, are we glad to have him. In Lawrence's senior season at Silver Bluff High School (in former Bronco Antwaun Carter's hometown of Aiken, SC), he recorded 97 tackles and 3 sacks from the defensive tackle position. Then, Lawrence headed to NJCAA power Butler Community College in Kansas where he helped the Grizzlies to a #2 ranking in the final football polls a year ago. Lawrence was also named an NJCAA All-American and All-Jayhawk conference as he racked up 66 tackles (27 for loss) and 10 sacks. Lawrence chose the Broncos over offers from Clemson, Kansas State, Middle Tennessee State, Ole Miss, South Carolina, South Florida and Tennessee.

This is his real nickname. Really. 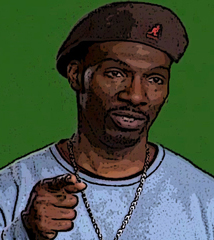 Honest to goodness, I said this about Demarcus Lawrence in last year's countdown after only seeing him perform in the Spring game:

I don't think it's a stretch at all to say that he could be an all-conference performer his first year with the Broncos...

So, I think that about wraps up this whole "case for credentials" nonsense, right? Okay, maybe it was a lucky guess, but it wasn't hard to see even at that early stage that Lawrence could be a special player for the Broncos and he absolutely showed that last season, when he led the conference in sacks with 9.5 and tied for first in TFL/game. Furthermore, Lawrence put up these silly numbers in less than a full season after being suspended for 2 games—you can't help but wonder what he might have done with the full slate under his belt. Maybe just as impressive as Lawrence's sacking acumen (say five times fast), was his ability to separate ball carrier from ball. Lawrence notched four forced fumbles (say five times faster) last year, returning one for a TD and also threw in an INT. That's a lot of production out of one seemingly undersized defensive end. This year could be a bloodbath, statistically speaking. A year ago, I guessed that Lawrence would have "5+" sacks and technically I wasn't wrong...but I certainly won't short change him on his baseline again. In 2013, Lawrence will be near the tops in the country in sacks and TFL numbers and will easily make first team All-MWC. I can't help but think that teams keying on him will free up our other DEs to put up impressive numbers as well—he'll be the gift that keeps on giving. Truly, the only drawback of Lawrence's year will be his inevitable jump up draft boards, so don't be surprised if 2013 is the last we see Mr. Lawrence on The Blue™. Nonetheless, his junior year should be one to remember so keep your eyes locked on #8 (the one playing defense).

All of the vanquished offensive tackles that Lawrence left in his wake last season got together to record a hit single. It's title: "I fought D. Law and D. Law won"