Roundtable: Where would Boise State have finished in this year's Big East?

And when will we ever bother to learn what this year's Big East is actually called?

Share All sharing options for: Roundtable: Where would Boise State have finished in this year's Big East?

Boise State was thisclose to putzing around in the Big East this season, and it was a thing that all of us actually wanted at one point! Phew, good thing we're not in charge. Instead of the Big East / American Athletic Conference / Whatever, the Broncos will be playing football and everything else in the Mountain West. But what if ... What if the Broncos had stayed? What if Louisville were coming to Bronco Stadium this season? What if bird suddenly appeared every time Nick Patti was near?

Question: Where would the Broncos have finished in this year's Big East?

Ummm... Don't you mean The American?

I think the Broncos would have done very well for themselves in the Big East. I actually think this year's actual road schedule is WAY tougher than the one Boise State would have had. Plus, I think there would have been some added adrenaline going into places like Cincinnati and Temple for the first time ever. With that being said, I think an 11-1 record and a birth to the Big East Championship game was a very real possibility. A championship game on The BlueTM would be the biggest game ever in the state of Idaho and would be nearly impossible for an opponent to come in and win, resulting in Boise State's first ever Orange Bowl bid. 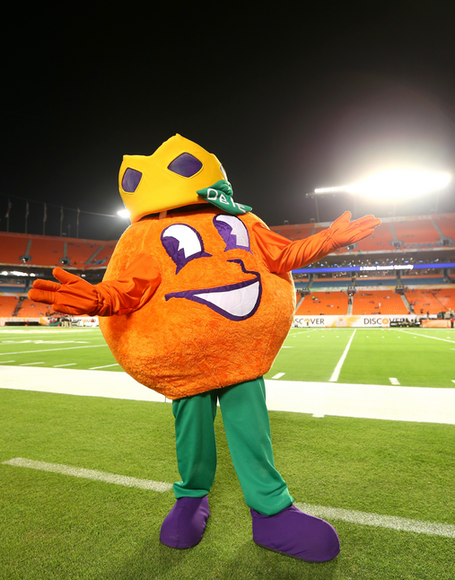 I like the idea of Boise State playing Louisville on The BlueTM, twice. There is a talent gap between the Broncos and the Cardinals, but it's no gappier than a Virginia Tech or a Georgia. Boise State has overcome bigger and won. They haven't really done so without a Kellen Moore fellow, but Chris Petersen tells me Joe Southwick is basically Kellen Moore. And who am I to argue?

The Broncos getting up to play Louisville isn't my biggest concern with the Big American (did I get it right?). My big concern is with playing in a new conference. Did anyone see the San Diego State loss coming? Would anyone see a Cincinnati loss coming? I never see losses coming; I have loss macular degeneration. Someone, somewhere would trip up the Broncos, I can sense it.

The Broncos would have fared well in the Big Athletic Eastern-American Conference. Yes - there would have been some tough games, which would most likely have involved Louisville and Teddy Bridgewater. And regardless of the obvious/supposed talent gap between the two teams, I'm guessing we'd come away with one victory and one loss against the Cardinals (one regular season and one championship game - take your pick).

In all reality and despite conference affiliation, I think our current schedule will prove to be more difficult than what we would have played if we never would have left and then came back, having never really left in the first place? Wait, that's not a question - yes it's a tougher schedule.

So what I really mean by all that is that I see us losing one game in the Big Athletic Eastern-American Conference. However, we play for the conference title, get an Orange Bowl bid, and sign Coach Pete to a lifetime contract. With blood.

What would you predict for Boise State in the Big Whatever? Don't you dare say two or more losses! (You can say whatever you want, I'll just read through my fingers.)