There are a paltry 15 days until the Battle in Seattle, so today I'll take a gander at #15 on the Bronco roster—Ryan Finely

By being one of the best QBs in Arizona. In fact, Finley led the state last season in passing with 3,442 yards and also pitched in a solid 35 TDs against just 8 interceptions. Finley also chipped in an additional 282 rushing yards with four scores a season ago. As a junior, Finley put up 2,911 yards and 25 TDs with just 7 interceptions. Scout.com had Finley pegged as a 3-star recruit and the 49th best QB prospect in the country. He verballed to the Broncos early on, which scared away a lot of suitors (even Colorado!), so BSU was his only offer. I love it when things work out.

Finley probably has 6 inches on Nick Patti but weighs 10 lbs. less. Tim Socha has some work to do or he'll be our first QB to ever be sacked by a stiff breeze. 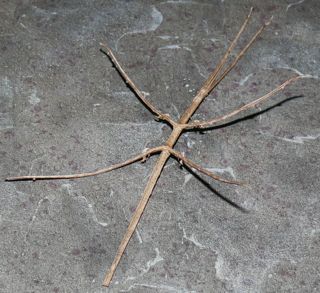 A stick bug, because we shan't let a skinny joke go unjoked.

Finley is a capable and impressive QB, but unless something akin to the apocalypse were to occur at the BSU QB position, we will NOT be seeing him this year. Finley could obviously stand to gain some weight and spend a little time learning the Bronco system before he'd be game-ready anyway, so it's probably for the best that BSU has 3 solid QBs in front of him. Part of me thinks that Finley is in a pretty tough spot, to be honest...with a junior and RS frosh in front of him and a highly-prized dual-threat QB (Jalen Greene) poised to arrive in January. Finley not only has to have a good redshirt year, but needs to take massive strides. In many years, he might be considered a shoo-in to inherit the position, but with the way the classes are staggered, it will take some major movement for that to happen. I'm not writing him off yet, mind you, just stating that the path to playing time doesn't exactly get less thorny after the departure of Joe Southwick this year. Finley is apparently still suffering some lingering effects of a shoulder injury, so has been somewhat limited in camp thus far, but hopefully he'll be able to return to 100% capacity in time to effectively run some scout team O during the season. I don't know when we'll get to see Finley do his thing on The Blue™, but he has the skills to be a factor and even in a backup capacity, I'm glad that we've got him.

I might have mentioned Finley's "Frosh Kaepernick" physique already, but it's worth noting that at the recent Bronco talent show, Finley performed a stunning hula hoop routine...with a Cheerio.