Roundtable: What is the best case and worst case scenario for the Broncos this season?

Share All sharing options for: Roundtable: What is the best case and worst case scenario for the Broncos this season?

The season is so close I can taste it, and it tastes like victory and chili and 7up in an opaque cup. The past eight months of hibernation have done crazy things to our heads, like dreaming up best case and worst case scenarios for the Broncos and dreaming up what our office will look like in the new football complex. What? We're not getting an office? Then what are those BAA fees for? This is like Bronco stock all over again.

What is the best case and worst case scenario for the Broncos this season?

The best case scenario is clearly an undefeated season or a one-loss season that results in a BCS bid. The extra influx of dough sure would help and it would do a lot to suggest that Boise State is "back" as it were. The worst case scenario is more than one conference loss and a failure to appear in the inaugural MWC title game. The Broncos have a rough road schedule this year, but every game is winnable and failure to land in the title matchup would have everyone (loudly) screaming about a changing of the guard. I don't like screaming.

Clearly, the best-case scenario involves Boise State winning every game it should and/or can win. The homer/optimist in me says that means a 13-0 season and a BCS bid (FIESTA BOWL!), and that is certainly in the realm of possibility. At the same time, the 2013 road schedule is one of the toughest in (recent) Boise State history. This leads me to the worst-case scenario. Losses at Washington and Fresno State, and less likely at Utah State and San Diego State can (but shouldn't) happen. A 9-4 season is within the realm of possibility, but less likely than a 13-0 record.

The best case scenario for Boise State is a season of drama-free, easy wins. While this sounds boring (it is), this is due to the unbelievably high expectations that the Boise State fan base has. It's going to be awfully difficult to surprise us anymore, especially on the level of past Fiesta Bowls. So while this would be an unexciting season, I would much rather have that over the losses that Boise State has experienced the past two years. Speaking of...

The worst case scenario that I can think of is losing to Fresno State and Derek Carr. When I look at the schedule, that one game seems on par with the 2010 Nevada game when Kaepernick was a senior. Now I doubt Derek Carr will go on to have any success in the NFL, I would hate for a Boise State win be something that could propel him into that.

Best case scenario: the Broncos go undefeated. There is only one other undefeated team in the country, and the defensive line finds enough replacements that we forget about this summer of suspension. The offense would rediscover its identity, and Coach Petersen unveils the blogger basement in the new football complex. Oh, and Auburn and Oregon are found ineligible for the 2010 season National Championship and for some reason the BCS awards the national championship retroactively to Boise State.

Worst case scenario: the Broncos go undefeated. They beat Washington in the Las Vegas bowl. Chris Petersen realizes he can no longer take the ridiculousness that follows every Boise State season, so he runs for Governor. He wins. Mark Coyle replaces Coach Pete with Bobby Petrino. 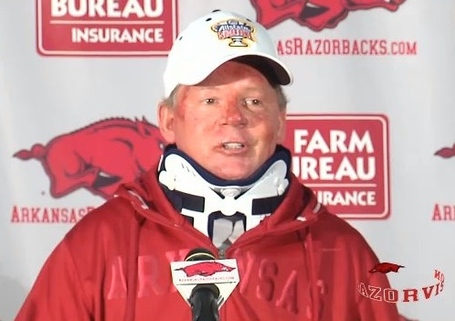 I was interested to see which one of us would be the crazy one and suggest that the best case scenario for Boise State is to go undefeated and make a national championship appearance. There's still time for the crazy, Nate and Jesse. Do us homers proud, and then probably go get your heads checked.

For my money, undefeated is the ceiling, four losses is the floor. I think a perfect season could propel the Broncos into the national championship discussion, but that's as far as title talk would go. The Broncos should do no worse than a BCS bowl if they win all the games. For worst case, I'm with Glorfield on the four losses, except I'll add a loss to BYU into the realm of possibilities. Four losses and a New Mexico Bowl appearance? Barf.

I don't think there is anything crazy at all about putting the Broncos in the National Championship this year. What is crazy is Kellen Moore ignoring my calls for the last 4 years.

The Broncos going undefeated is the best-case scenario. With a pre-season ranking in the high teens, we are definitely close enough to make our jump into the top 12. However, I don't think that we'll be getting into the top 2 (damn SEC). I really think the determining factor here is how much of a crap-shoot the rest of the Mountain West will be. With a good road schedule, and a little bit of help, I don't see any reason that we aren't in National Title talks, but likely end up in a BCS bowl.

And the obvious worst-case scenario is a loss to Tennessee-Martin during the much-anticipated debut of the new HD video screen. Who am I kidding here, the only way we lose to Tennessee-Martin is if Doug Martin shows up and plays every position. Losses to Washington, BYU, SDSU, and Fresno (gag) would be a worst-case scenario in my eyes. Hell, if the conference championship doesn't run through Boise I'll be royally disappointed. Final call: four losses.

I bet you have an opinion about this. Share your thoughts in the comments, and be as optimistic and pessimistic as possible. I want extremes and/or for you to agree with my opinion on the topic.