Pay-cable subscribers rejoice! Your TV will have the Washington-Boise State game on it thanks to an eleventh hour deal ahead of FS1's launch on Saturday (special launch programming: NASCAR). To save you the channel surfing, FS1 is channel 26 on CableOne, 219 on DirecTV, and 150 on Dish. Take a left at Versus, and a right at the SPEED Channel carcass. You can't miss it.

The soothsayer of CBS's bowl projections has Boise State in the Fiesta versus Oklahoma State. But what about the Famous Idaho Potato Bowl, you ask? What, you didn't ask? Too bad, it's Western Kentucky vs. Bowling Green, and now you cannot un-know.

There is no black-out. Only boring-outs. 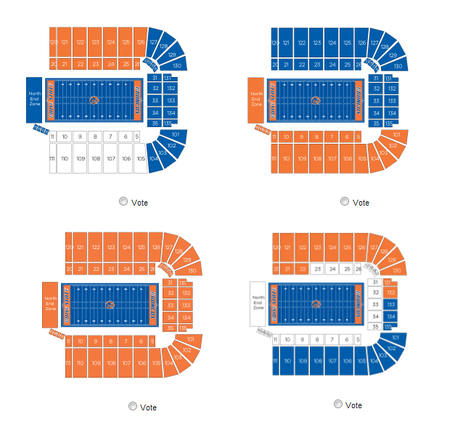 Whatever you do, don't vote for the orange-out. Nothing good happens in an orange-out (see San Diego State last year, Cheetos blizzard in a future Nicolas Cage thriller.)

Thanks for the deets, Magic Valley Times-News

During a timed situational drive, the first offense drove to the defense's 40-yard line and Southwick spiked the ball to stop the clock with three seconds remaining. On the ensuing play, Southwick bought time by scrambling to his left, and then let go of a Hail Mary pass to the end zone. The offense came down with the ball for the touchdown and all the offensive players stormed the field in celebration.

Chadd Cripe identified the pass catcher as Taylor Pope. A Hail Mary to a Pope. You can't make this stuff up! If you did, Max Corbet would be on you like stink on a monkey.

So Washington's practice yesterday was ... interesting

First, defensive end Cory Littleton was carted off the field with a leg injury. Then this:

DT Danny Shelton took out Keith Price on QB keeper. Sarkisian threw off his visor and fell to ground in disgust. Then ended practice.

Then Sarkisian stormed off the field, saying, "Nobody's talking (for interviews)." Should be some fun times on August 31.

I am trying an experiment with sending a weekly college football / Boise State email. Please sign up if you're interested. It will be at least two times better than any spam you get.