It appears that for the first time in four years, season ticket sales will fall.  Chadd Cripe postulates that rising ticket prices and BAA fees, the lack of an impressive home schedule, and no "marquee" players are to blame.  I'm going to go out on a limb and take the Official OBNUG Stance and say it's ticket prices.  Cripe makes a good point that Boise State has to finance high-caliber coaches and facilities somehow.  With the increased ESPN money, however, Boise State will have a lucrative revenue source for the foreseeable future.  More games on ESPN could lead to fans staying home and watching rather than pay higher ticket prices to attend a game.

Speaking of ESPN, they splurged a bit, buying the Famous Idaho Potato Bowl

This could be a good thing for Boise.  Not many details have been reported so far, but hopefully this will bring higher profile opponents to Boise in December and bigger payouts.

Did you know The Famous Idaho Potato Bowl is the longest running cold weather bowl?

Party on Wayne!  This one year pilot program will allow fans to responsibly enjoy their favorite adult beverage in the zone (See Below) from 10am to 10pm.

There are still some rules: 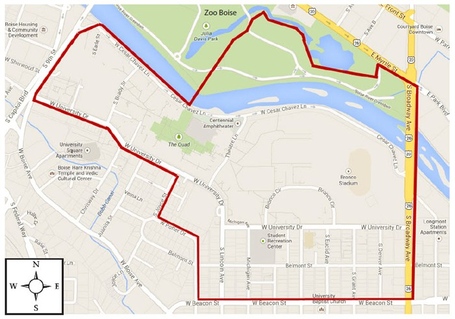 Sport Business: Who owns the rights to an athletes' tattoos?

This is a good read if you like Ink.

What do you think about the ticket prices?  Too much? Just right?  What would you suggest for maintaining revenue while making home games more accessible to fans?