We've got 58 days until kickoff...so today we'll be taking a look at #58 on the Boise State roster -Robert Ash 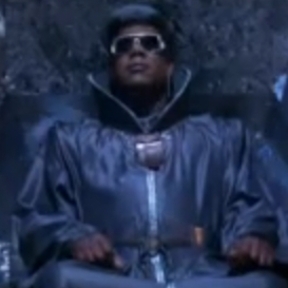 Clarence Clemons in Bill and Ted's Excellent Adventure (via)

Ash is majoring in supply chain management, which likely makes him the only college football player on earth to do so (the rest are majoring in business or communications with a minor in ballroom dancing).

The saga of Robert Ash, football player, took its most recent turn this spring when the big fella - first a stud defensive end, then a high-ceilinged defensive tackle - converted to offensive guard. Blame his metamorphosis on having a tweener body with a burly frame. He has grown into a guard and could very well continue to grow. When Boise State strength and conditioning coach Tim Socha is done with him, he will weigh 600 pounds and play both guard positions - legs and torso at left guard, belly at right guard, the center gasping for air somewhere underneath, let's send David Augusto in to find him - be safe in there, David, and tell me if you find my candy bar that went missing at the spring game!

Why was Ash moved to offense? One can assume he never did ascend the DT depth chart the way Bronco coaches had hoped, which is a notable admission considering how shallow the depth chart could be this season. You and I, taped together, might make the two-deep at defensive tackle this year. Guard, however, is where superfluous D-linemen go to blossom, as has been the case with Bronco stars like Will Lawrence, Chuck Hayes, and Dan Gore. The same could be in the cards for Ash who, despite what seems like an epic-long history in blue and orange, is only a sophomore and has three years to master the fine art of stomach bumping (footballspeak for what guards do).