Not too many references to palindromes so far this year, but today is one of only three that are left in the countdown. 33 days, my friends. 33 days. Today, we highlight incoming freshman Dionza Blue. 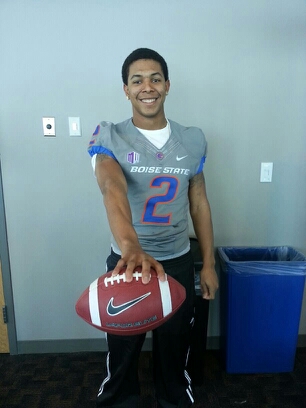 He really couldn't go anywhere else... His last name is BLUE!!! Originally a Fresno State commit, the three-star cornerback flipped to the Broncos as soon as he received a scholarship offer, fulfilling his lifelong destiny. Also recruited as a running back, Blue turned down offers from Hawai'i, New Mexico State, and San Diego State after recording 68.5 tackles, four interceptions, 667 rushing yards, and 16 touchdowns during his final prep campaign.

Decomitting from Fresno State. Blue was also named first-team Tribune All-Area and first-team All-Serra League at defensive back his senior season after leading Bishop Amat to a 7-3-1 (a tie? Really?) record, falling to CIF State runner-up Long Beach Poly in the first round of sectionals.

Blue joins four other cornerback recruits in Boise State's 2013 recruiting class (Cameron Hartsfield, Mercy Maston, Jonathan Moxey, and Cleshawn Page). With two season of junior college football under their belt, it stands to reason that Maston and Page will figure into the defensive backfield rotation. Don't be surprised, however, if one of the freshmen see the field in 2013. We've seen over the past couple of years how fragile our cornerback depth can be... when it rains, it pours. The presumptive starters, Bryan Douglas (recovering from an ACL injury) and Donte Deayon (zero career starts), are both question marks to start the season. Offensive coordinators around the league will undoubtedly test the two early and often. Depending on our they fare, a lot of playing time could open up for the other non-redshirting cornerbacks on the roster. On film, Blue looks highly skilled and nimble in the air with plus footwork. He will need to bulk up a bit to help against the run. He looks a little timid coming up to make tackles, but wraps up well and finishes the play. During his freshman year, Blue could be a valuable player in the secondary with his coverage skills, coming in on long third down plays against 4 and 5 receiver sets.

The picture below shows "The Boise State Pitch," reserved for only the finest recruits. 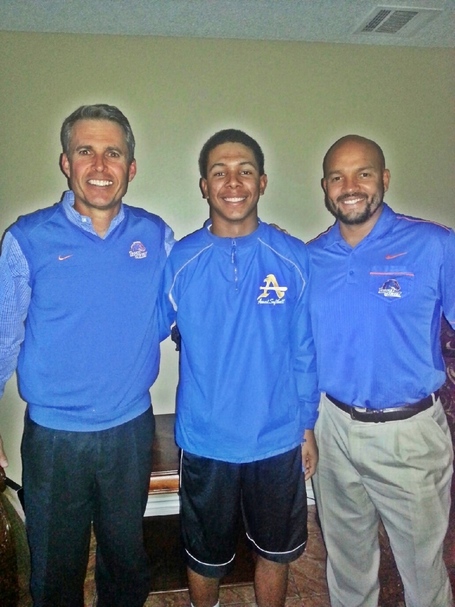