Fall camp will start Monday, August 5th! That's less than two weeks away and then things start getting interesting. Today, 38 days from kickoff, we highlight Boise's own Corey Bell.

A two-way player for the Capital Eagles (S/RB), Bell finished his senior season as a first-team all-state selection and was named SIC player of the year after recording 44 tackles (12 for loss), 3 sacks, and 3 INTs on defense and accounting for 1,204 yards of offense and 25 TDs on offense. In Bell's junior campaign, he had 50 tackles (9 for loss), 3 INTs and 2 forced fumbles. Bell was also named to the Academic All-Conference team on 3 separate occasions. Despite the accolades, Boise State extended Bell his only scholarship offer. Originally slated to grayshirt, the coaching staff decided to bring him to campus in the fall of 2011 to redshirt but quickly earned his way onto the field, burning his redshirt midway through the season. 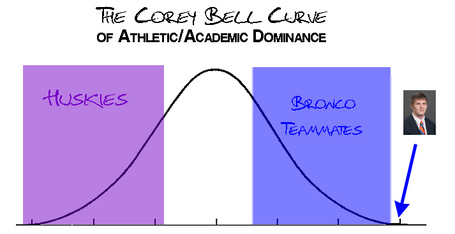 Bell appeared in each of the Broncos' 13 games during the fall of 2012 and started four of the final five games of the season, racking up 45 tackles. He scored a fumble recovery touchdown against Wyoming which resulted in one of the Broncos' highest honors, leading the Broncos onto the field with The Hammer the following week against San Diego State. During his prep days, he was the 2010 SIC Player of the Year, a 2010 first team All-State selection, and was selected Academic All-Conference three times.

According to this depth chart Boise State provided the media on Monday, the nickel position has been officially renamed strong-side linebacker. It looks like Bell will start fall camp backing up rSR Jonathan Brown (as always, take that with a grain of salt; depth charts in July really don't mean anything). Even if that holds true, Bell will see plenty of playing time on defense and special teams. He will be looked upon to provide veteran leadership and solid linebacking play who can both defend the pass and stop the run. He will also continue to play an important role on many special teams units using his punishing style to control that aspect of the game. I expect him to emulate his stats from last season snagging around 50 tackles. It'll be interesting to see if the position-name change is indicative of a changing defensive philosophy, whereas the gameplan will focus on stopping the run rather than the pass. If that's the case, I can see the amount of tackles to go up. All in all, Bell is True Bronco: a great athlete, a great student, and somebody we should all be proud to cheer for.

Corey Bell loves soccer and wears a Thierry Henry jersey under his pads.