40 Days until kickoff. I had to pull myself away from Royal Baby Watch 2013 to bring you today's countdown, profiling Armand Nance. So Cate, how does Armand sound? I think Prince Armand, Duke of Cambridge sounds pretty catchy.

Nance chose the Broncos over an offer from North Texas. Let that settle in for a second. Two scholarship offers for a kid who played for Boise State as a true freshman and will likely be a major contributor this year. What gives?!?!? Well, Nance was listed a pure-blocking TE as a recruit showing a limited receiving skillset. This could be from a lack of talent, the offensive system his high school used, or a combination of both. Regardless, a lack of receiving stats can definitely limit your value for a team to give up a roster spot and a good chunk of change to cover your schoolin'. Ahhh... but Boise State coaches are smart and moved Nance to defensive tackle once he arrived on campus. 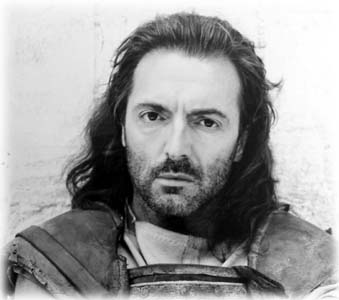 Chris Webber... just like last year only with longer hair.

Appeared in eight games during his debut season with the Broncos, recording nine tackles and 2.5 tackles-for-loss. Named first team all-state and was a Texas State Champion as a senior. Second team all-district as a junior. Honorable mention all-district as a sophomore. 3-time academic all-district. Member of National Honor Society.

Ricky Tjong-A-Tjoe will be one starter at defensive tackle. The other spot is open at this point. Initially slated to redshirt last year, Nance's experience filling in for an injury-depleted frontline gives him the inside track to the job. He will have some stiff competition from newcomers Justin Taimatuia, Nick Terry, and "Deuce" Tutulupeateau Mataele. If anything, I expect Nance to win the starting gig because of his commitment to the program and the weight room and the lunch room. I say that because as a recruit his weight was listed as 230lbs or 238lbs depending on which site you like. Last year, he weighed in at 273lbs. Now, he's up to 290lbs. Talk about packing on the weight and... it's for a purpose: TO STOP THE RUN!

True story: I once stood next to Nance at Qdoba. I wanted to see how much he was going to order but was too distracted by his girthy legs... he has got some monsters which are perfect for exploding off of the line at the snap. He didn't look chunky which you might expect from gaining so much weight. He just looked solid. He also looked like he was all leg.

Nance loves the show Diners, Drive-Ins, and Dives on the Food Network. He loves it so much in fact, he spent the summer of 2012 stopping at all of Guy Fieri's favorite eateries. With all of the great food, Nance couldn't help but gain 40lbs. Once he got to campus, the coaches decided to turn lemons into lemonade and moved him from TE to DT.