The number 41 jersey is shared by DE Kharyee Marshall and PK Dan Goodale (it's an XXL), so today I have to follow my heart... 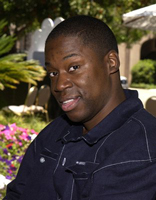 I had the highest of hopes for Marshall a couple of seasons ago...he was easily our fastest and most athletic DE and looked like he'd take the field by storm. I guess speed isn't everything—especially when you are behind the likes of Shea McClellin, Tyrone Crawford and (now) Demarcus Lawrence. Of course, Marshall has also had to contend with weight issues (too light) and injuries. Hopefully, this is the year he can put it all together because he won't get another. Last year, Marshall actually played pretty regularly, even though he didn't light up the stat box. Marshall's 18 tackles on the year (1.5 for loss) were respectable and I think if he has continued his progression, I think has a chance to crack the top four. Clearly Demarcus Lawrence is THE man at one of the DE spots, but the departure of Ukwuachu has shaken up the race beyond that. Tyler Horn and Beau Martin seem like top contenders to fill the other spot, but Marshall is right in the mix as well to back up D-Law. Redshirts Sam McCaskill and Darien Barrett will also round things out and in reality, all six will probably play within the extended rotation. Really, it's just a matter of which end of the line these guys end up playing on—until we know that, it's very difficult to put together a mock depth chart. Fall Camp will be a determining factor in this DE arms race. Marshall could be as high as 3 or 4 on the depth chart or as low as fifth...it's just too early to tell. Luckily for Marshall, his experience gives him a bit of a nudge and all these guys will probably get playing time. I'm sure Marshall wants his senior year to be his best, so he'll pull out all the stops come camp time.

The only store that Marshall will shop at is Marshalls, which makes grocery shopping extremely difficult.