I'm sure you're wondering how a defensive tackle get all the way down here. Me too. 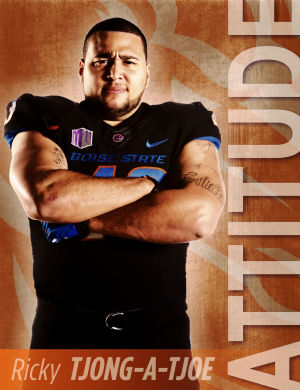 Last season, the Broncos finally got a full year out of Tjong-A-Tjoe...and it was a good one. Tjong-A-Tjoe had a career year in 2012, producing 37 tackles (4.5 for loss) and 2.5 sacks as well as 2 fumble recoveries. We'll need him to play every bit as well this year (or better), because this year—he is IT. Now, I don't say/type this meaning that we have no other DTs...we do, but Tjong-A-Tjoe is the unquestioned leader of the group this season and will need to not only perform at Chris Petersen's mythical "high level" all year long, but he'll need to coach up and mentor the other DTs as well, because behind him, there is precious little experience (although there's loads of talent). Tyler Horn looks destined to move back to the outside after a short stint at DT last season, so TRUE soph Armand Nance is the only other tackle with any kind of game experience with the Broncos. Enter Deuce Mataele, a JC-transfer who impressed this Spring and redshirt Elliot Hoyte who has a solid year with the squad under his belt. They'll be joined in Fall Camp by another JC-transfer, Justin Taimatuia, and Nick Terry, a true freshman. As you can see...the depth concerns are diminishing, but that experience factor is still the elephant in the room. Tjong-A-Tjoe needs to be healthy and he needs to be ready come August 31, because as he goes...so goes the core of the D-line. Frankly, I think Ricky is more than up to the task. He made great strides last year and, as evidenced by his mug being plastered on the side of Bronco Stadium, has gained the trust of the coaching staff. When Fall Camp starts next month, his number one task is to make those around him better—I feel like he should be good to go.

To make Bronco Stadium a more family-friendly atmosphere, this year during player introductions they'll announce that Tjong-A-Tjoe hails from "Amsterdang"